I can't recall a flotation like it, in terms of the sheer number of executives emerging as wealthy beyond most people's wildest dreams or expectations - not even the conversion of Goldman Sachs into a public company or the listing of Google. 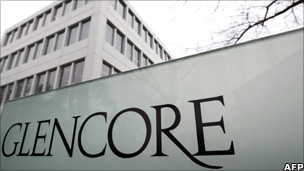 When Glencore publishes its full flotation prospectus later this morning, it will show that there are four billionaires working for the world's leading commodities, minerals and energy trader.

These are led by the chief executive Ivan Glasenberg, who will be shown to be worth around $10bn.

But it is the quartet of billionaires, plus many others worth more than $100m each, and hundreds who are millionaires, that makes Glencore quite extraordinary.

Now all the top executives are saying they won't sell any of their shares for five years at least - that they won't use the flotation to cash in. As for Glasenberg, he's pledging not to sell even a single share till he steps down as chief executive.

Even so, the stock market listing converts their stakes into currency. These are not paupers.

Is there a price for them of this remarkable valuation of their respective Glencore holdings?

Well their company is already receiving vastly more public scrutiny - for it's environmental record and tax practices, for example - than it did as a pretty secretive private company over the last 20 years or so.

It won't like all this attention - such as claims in this morning's Daily Mail of how Glencore's copper mining operations in Zambia are doing too little for that country.

And it certainly didn't enjoy the furore sparked by remarks of the new chairman, Simon Murray, about how women's desire to have babies prevents them rising to then top in business.

But some of you might feel that whatever embarrassment is caused to Glencore's bosses will be softened by all that personal wealth.

The prospectus – which is longer than Proust, and racier than Proust in parts – shows that the chief executive, Ivan Glasenberg is worth just under $10bn.

Also, two of his lieutenants are each worth around $3.7bn, one other has a $3.2bn holding and the fifth in this billionaire quintet has a $2.8bn stake.

The poor finance director, Steven Kalmin, is worth a mere $610m.

As the FT points out, each one of these has a holding worth more than what the famous (some would use a less flattering epithet) founder of Glencore, Marc Rich, pocketed when he sold the business to management less than 20 years ago.