Aircraft carrier costs to rise by at least a billion (again)

The cost of Britain's controversial new aircraft carriers is set to rise by at least £1bn, and perhaps almost £2bn, as a result of the government's decision taken last October to make them compatible with different aircraft than those originally envisaged. 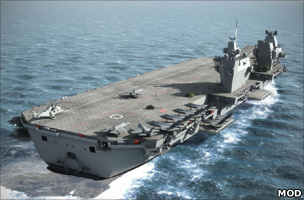 I have learned that the working assumption of the contractors on the project, which are BAE Systems, Thales UK and Babcock, is that the carriers will now cost taxpayers some £7bn in total, compared with the £5.2bn cost disclosed by the Ministry of Defence last autumn - and up from the £3.9bn budget announced when the contract was originally signed in July 2008.

One defence industry veteran said the final bill was bound to be nearer £10bn, though a government official insisted that was way over the top.

The Ministry of Defence and the Treasury believe that total final costs could be nearer £6bn, if only one of the carriers is reconfigured to take the preferred version of America's Joint Strike Fighter aircraft.

An MoD official said no final decision had been taken on whether the first carrier to be built, the Queen Elizabeth, or the second carrier, the Prince of Wales, or both would be reconfigured.

He said it would probably be the case that changing the design specification for the Prince of Wales would be the cheapest option. But if that happened, it is not clear when - if ever - the Queen Elizabeth, due to enter service in 2019, would actually be able to accommodate jets (as opposed to helicopters).

Whatever happens, the increase in the bill will be substantial - and is only regarded by the Treasury as affordable because the increment is likely to be incurred later than 2014/15, when the expenditure constraints put in place by the Chancellor's spending review come to an end.

The Treasury is adamant that the MoD will receive no leeway to increase spending before then.

"The conversion of the Queen Elizabeth Class...will allow us to operate the carrier variant of the Joint Strike Fighter that carries a greater payload, has a longer range and is cheaper to purchase. This will give our new carriers, which will be in service for 50 years, greater capability and interoperability with our allies. Final costs are yet to be agreed and detailed work is ongoing. We expect to take firm decisions in late 2012."

The disclosure of the rise in costs is bound to reopen the debate about whether the UK really needs new carriers, especially since the UK will be without any aircraft carrier till 2019, following the decision to decommission Ark Royal. 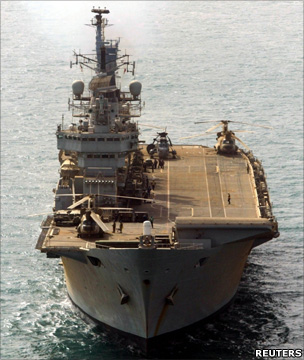 British Tornado jets are currently active in Libya, flying from a base in Italy, without the use of a British aircraft carrier.

The latest increase in likely expenditure on the enormous carriers - which are almost the size of three football pitches - stems from the decision of the Ministry of Defence in October to change the design one or both of them so that they can be used by the carrier version of America's Joint Strike Fighter.

This would mean they have to be fitted with catapults and traps - or "cats and traps" - rather than ramps.

Industry and government sources tell me that even if the MoD goes for the cheaper option, and even if the cats and traps are fitted to only one carrier, the additional bill will still be of the order of £1bn.

The hope however would be that in the longer term savings could be achieved because the maintenance costs of the more conventional Joint Strike Fighter should be lower.

One of the reasons the refit could be relatively more expensive is that for one of the carriers, HMS Queen Elizabeth, there would have to be a retrofit - because so much work has already been done on it.

The carrier project has been beset by controversy and cost increases.

In June 2009, I disclosed that the carrier costs had soared by more than £1bn as a result of a decision taken by the previous government to delay their entry into service.

Then last October the government, in its Strategic Defence and Security Review, came close to cancelling one or both carriers.

In the end, it committed to build both, but with the strange caveat that it might end up using only one of them. This was the reason given by the Prime Minister David Cameron in the Commons for building both:

"They [the previous government] signed contracts so we were left in a situation where even cancelling the second carrier would actually cost more than to build it; I have this in written confirmation from BAE Systems".

The MoD told MPs that "as the cancellation costs would have had immediate effect, the costs in the short term would have been significantly higher than proceeding with both carriers as planned; nearly £1bn more in financial year 2011/12 if both carriers had been cancelled".

The MoD was also concerned that cancelling the carriers would have undermined British capability and know-how in the manufacture of complex warships.

The carriers, called Queen Elizabeth Class Aircraft Carriers, are being built by the Aircraft Carrier Alliance, whose members are the UK defence giant BAE systems, the British engineering group Babcock, and Thales of France. The Ministry of Defence is also described as both a member of the Alliance and a customer.

Update 15:06:It has been pointed out to me, by what you might term a grizzled sea dog, that the UK does still possess two ships that can take aircraft. They are HMS Illustrious and HMS Ocean (which is a commando carrier with a flat top).

However they can't accommodate jet airplanes, only helicopters - so for veteran sailor it was a terrible error for the government to scrap the illustrious Harrier jumpjet.

He also takes the view, which I've heard from many other military personnel, that it would be bonkers to convert only one of the new carriers to take the carrier version of the Joint Strike Fighter - because if that were to happen, one of the carriers would be an enormous white elephant, and the other would not be able to provide a service for 100% of the time (it would need periodic servicing).

That said, the cost of retro-fitting the first carrier being built now and also redesigning the other one would certainly be nudging £2bn, maybe more.

The problem for David Cameron is that he may find it hard to make the strategic case, since last autumn he justified building the two on the basis that it would not save any money to cancel one - which is not the most positive case for what turns out to be a very substantial public investment that anyone has ever advanced.