Huge changes to the landscape of the British media industry are being heralded today. 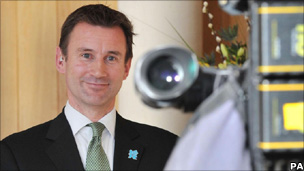 Jeremy Hunt, the culture secretary, has given the green light to News Corporation's £7.5bn takeover bid for British Sky Broadcasting - which would create a media giant whose revenues would dwarf all rivals, even the BBC.

But as a condition of allowing the deal, he is forcing Rupert Murdoch's News Corporation to spin off Sky News into a new company listed on the stock market, with its own board and whose chairman could not be a News Corporation employee, so not a member of the Murdoch clan.

Sky News would be 61% owned by outside investors, and 39% owned by News Corp - reflecting the current ownership structure of BSkyB. And News Corp could only increase that shareholding with the explicit agreement of the culture secretary.

And to protect its editorial independences, its board and an editorial board would have a majority of independent directors.

What is more, News Corp would sign a contract to buy Sky News's services for 10 years, and to licence it the "Sky News" brand for seven years - an arrangement which is supposed to provide incentives to both sides to ensure that Sky News has a viable future longer than 10 years.

Correspondence published today between Mr Hunt and News Corp indicates that News Corp has - under pressure - made greater concessions than it wanted to do guarantee Sky News' independence.

And as a result of these concessions, Ofcom - the media regulator - has said that the harm its perceives as flowing from the deal, that it would restrict choice or plurality of news providers, would be purged.

Even so there will be a storm of protest that Mr Hunt is allowing the deal.

There will be criticism both from media rivals, such as the Telegraph, Mail and Guardian, and from grassroots campaigns.

One important caveat however about the significance of all this.

None of this will happen unless News Corp offers enough to persuade BSkyB's shareholders to sell. And what is completely clear is that those shareholders view the current offer of 700p per share as far too low.

Update 09:56: The hiving off of Sky News into a new listed company, 39% owned by News Corp and 61% by outside investors, would create a potentially interesting new player in the news market.

It could not be a pawn of the Murdochs and a News Corporation massively enlarged by the takeover of BSkyB (if that deal does go through - which, to repeat, is not guaranteed), for a number of reasons.

Of course it would be massively reliant on the so-called carriage agreement with News Corp that would be put in place, which would be a 10 year contract for Sky News to supply news services to Sky television.

Which means that initially at least, Sky News would be dependent on News Corp for 85% of its revenues. In other words, News Corp would be a pretty powerful customer.

But that is why Ofcom, the media regulator, insisted that Sky News should put in place a raft of governance arrangements to protect its independence (see above for more on this) - which would be a layer on top of the guarantees of independence that company law and stock exchange listing agreements force on companies traded on the stock market.

In that sense, the guarantees of Sky News's independence would be significantly more robust than the arrangements put in place 30 years ago to preserve the editorial independence of the Times newspaper.

What is particularly striking about the correspondence published this morning by the Culture Department about negotiations to maintain Sky News as an autonomous force in news is that it shows there was a bust-up in mid February between Ofcom, the media regulator, and News Corporation over all this.

Ofcom insisted that the chairman of Sky News had to be independent, not an employee of News Corp, and not therefore a member of the Murdoch clan.

News Corp initially said no to this demand. Which is not a great surprise, because in a way it was a humiliating request to put to the Murdochs.

Remember they regard themselves as having created not only all of BSkyB, but also Sky News. So to be told that no member of their family could chair something they see as their baby, well this would not have been an easy thing for Rupert Murdoch to swallow.

But the Murdochs did make the concession. Which I think tells you something about Rupert Murdoch's desire - in the words of one of his colleagues - to get "all his ducks in a row" as he approaches the milestone of his 80th birthday (he is 80 on 11 March).

Rupert Murdoch sees the takeover of BSkyB as an important element in the tidying up of his disparate assets, and in the end was prepared to allow Sky News the freedom demanded by Ofcom to achieve that end (the return of his daughter Liz Murdoch to the News Corp fold also has to be seen in the context of tying up these loose ends, according to Mr Murdoch's friends).

The other very interesting question is about the extent to which Sky News as an independent company would move rapidly to expand and diversify. For example, there is a logic to Sky News trying to take control of ITN.

But once again it is important to stress that none of this will happen unless News Corp succeeds in acquiring all of BSkyB - and that is not a done deal.

BSkyB's share price has risen sharply this morning. Its price now well above 800p is saying that News Corp will probably have to offer 850p (or more) to secure its prize - which would push up what News Corp would have to pay in total from £7.5bn to £9.1bn.

The negotiations on price are being led by James Murdoch, Rupert Murdoch's son, who runs News Corp's European and Asian operations.

Up to now he has offered considerably less than BSkyB's independent directors and shareholders want. It is utterly unclear whether James Murdoch will offer enough to achieve his father's wish of bringing BSkyB firmly into the News Corp fold cleanly and quickly.

PS. The importance of the Sky News brand licence coming up for renewal after seven years rather than the 10 years of the carriage agreement is that the phasing prevents a huge crisis at a fixed date of all agreements unwinding at the same time.

As for that brand licence, it is seven years with an option to renew for a further seven years - so it can probably be seen as guaranteed for 14 years.