What RBS pays its top people

It is with no real enthusiasm that I write once again about bankers' pay. If you feel you've read this story before, well I would understand. 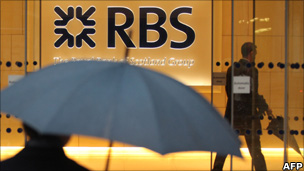 But there is a public interest in shining a light on the remuneration practices of Royal Bank of Scotland, since we as taxpayers rescued it from extinction in the autumn of 2008 and we own 83% of the bank.

The guys (mostly men) who run that bank work for us, in that sense.

So what have we learned from the publication of its annual report and accounts today?

First "code" staff are those executives who - under rules set by the Financial Services Authority, the City watchdog - are perceived to do things that have a bearing on the risks that banks takes. They are executives with jobs that matter to the stability and health of a bank.

And second, some of those 323 earned more than £1m, and the majority earned less: £1.2m is just the average.

According to the bank, there are something over 100 RBS employees in total who made more than £1m last year. Which, on the basis of the average figure of £1.2m for code staff, implies that most of the higher paid individuals pocketed well over £1m.

What's more, there are other RBS employees, who aren't code staff - some traders for example - who earn even more than top-paid code staff (hope you're still with me).

Anyway, for what's it worth, RBS's code staff earn less than Barclays' 231 code staff, whose average pay was £2.4m per head.

So presumably the Chancellor of the Exchequer will point to this disparity as proof that taxpayer-owned RBS is showing restraint.

You will have your own views on whether RBS is showing enough restraint.

RBS makes another disclosure of some interest, which is the pay of its five highest paid senior executives below board level (a disclosure it and the other big banks promised to make under the recent Project Merlin deal with government).

But, again, this does not tell the whole story of what RBS pays.

There are other RBS staff, working in high-paying bits of its investment bank, who earned more than these five.

Earlier this week, the goverment received a report (from Will Hutton) urging that public and private sector organisations publish the ratio of their top people's pay to median or typical pay within the relevant organisaton.

Now in the case of RBS, its chief executive's pay of £7.7m is equivalent to about 233 times typical pay in finance, compared with other FTSE100 bosses who on average earn 120 times typical pay.

As for for top civil servants, well they tend to earn around £160,000 a year, around 6 times a typical public official's salary.

Or to put it another way, RBS's boss, Stephen Hester, seems to be handsomely paid for public sector or private sector.

Why? It's because he's a banker.