The price of Japanese reconstruction

More than £400bn has now been wiped off the stock market value of Japan's bigger companies since the quake and tsunami hit on Friday. 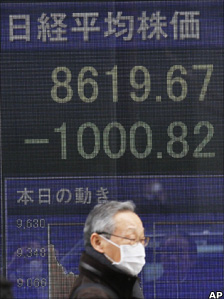 On one measure, Japanese shares have fall more over two days than since the crash of October 1987.

The contagion spread to the price of Japanese government bonds, which fell - rather than benefiting, which is what often happens, from a shift by investors out of assets, such as shares, perceived to be riskier.

Because of the sheer size of the Japanese national debt (more than 200% of GDP and rising) and the magnitude of the government's deficit (see my post of yesterday for more on this), fears are increasing about the cost of any programme to rebuild the devastated areas and national infrastructure - and what impact that will have on the health of the nation's finances.

The risk that a wide area around the Fukushima nuclear plant may have been contaminated is now weighing heavily on markets.

Although Japan's central bank yesterday doubled the size of its programme to buy financial assets, including government bonds, to $121bn or £76bn, that programme remains a fraction of what the US Federal Reserve has been deploying to stimulate domestic economic activity - so some are saying the Bank of Japan is not doing enough to bolster investors' confidence.

On the basis of the cost of insuring state debt, the credit of the government of the world's third biggest economy and second biggest exporter is now perceived to be as risky as that of nations on the fringes of Europe such as Estonia and the Czech Republic, according to Bloomberg, which cites data from CMA.

So what will be the impact of all this on the rest of the world? Although the Japanese economy and markets are vast, its almost 20 years in the doldrums after 1990 did not prevent something of an economic golden age elsewhere (at least till 2007).

But this time it may be different. Growth in the developed economies of the West remains fragile. The global financial system is not fully restored to health.

There cannot be total insulation elsewhere from the sheer size of the market movements in Japan. At the very least share prices in Europe are likely to weaken and assets traditional seen as safe - gold and US government bonds - will probably rise.

As for oil, if the perception grows that Japanese manufacturing activity will remain depressed for a while, its price will weaken - although the instability in the Gulf continues to exert upward pressure on the oil price. And to state the bloomin' obvious, shares in those businesses with a huge stake in expanding nuclear generation, such as the UK's Centrica and France's Areva and EDF, will remain under pressure.

What remains shrouded in fog is whether the combination of the Japanese debacle, with the momentous and uncertain events in the Middle East, will derail a worldwide economic recovery which is neither entrenched nor particularly robust.