RBS: 'Regulators are the main risk'

Stephen Hester this morning gave a generally upbeat presentation on the outlook for the largely nationalised Royal Bank of Scotland at an investor conference organised by Morgan Stanley.

The chief executive of RBS made three points that stood out for me. 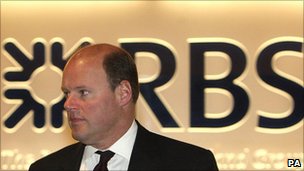 First, that RBS has a target of next year for weaning itself off one element of the support it receives from taxpayers: by 2012, it wants to exit from the asset protection scheme, the state insurance policy that has insured RBS against losses over £60bn on £282bn of poor quality loans and investments.

That would be an important milestone in RBS's recovery and in its journey from 83% ownership by the state towards privatisation.

Second, Hester said that he expected two interest rate rises in the UK by the end of this financial year. Which he would see as a good thing - because the rate rises would help the bank rebuild its margins, or the difference between what it pays depositors and what it can charge on loans.

That of course may make many of you rather grumpy: you may not like it that Mr Hester has to put the interests of his shareholders above those of millions of British people who fear they have borrowed too much and hate the idea of interest rates going up.

But what I find striking is that RBS's financial model calculates that the benefits to its profits of a widening in its margins outweigh the risk of the UK's economic recovery being seriously set back by such interest rate rises.

Plainly it would not be good for the UK or for RBS if those rate rises led to an increase in the number of consumers and businesses finding it difficult to keep up the payments on their debts.

Let's hope Mr Hester is right that not too many households - and businesses - would be put on the financial critical list by a couple of rate rises. But not everyone on the Bank of England's rate-setting Monetary Policy Committee would share his optimism on this point.

Finally, what I found particularly striking is that two of the three biggest sources of what Mr Hester called "downside" risk to RBS's ability to perform better for shareholders are "regulatory".

In other words, if RBS's share price were not to rise as much as Mr Hester thinks it should in the coming year, the blame should probably attach (in his view) to the Financial Services Authority and the Bank of England.

Well one of the big items on the agenda for regulators on the Basel Committee and the Financial Stability Board - the standard setting bodies for global bank regulation - are a review of the riskiness of banks' financial trading activities and the linked question of how much capital they should hold as a protection against losses on their trading books.

Regulators tell me that investment banks and the investment banking arms of universal banks like RBS and Barclays will be forced to hold much more capital.

And the other item on the Basel and FSB agenda is how much additional capital systemically important banks should hold compared with smaller banks.

As readers of this column will know, the Financial Services Authority and the Bank of England are what the banks would describe as hawkish on these issues.

The FSA and Bank believe there is a powerful argument for big banks being forced to hold perhaps twice the new 7% minimum ratio of equity capital to assets that is gradually being imposed under the new Basel III worldwide rules.

The argument of the Bank and FSA - made particularly by the chairman of the FSA, Adair Turner, and by David Miles, who sits on the Bank's Monetary Policy Committee - is that the long-term economic costs of the kind of banking shock we saw in 2008 are so great, that it would be very foolish not to force banks to have a much bigger shock-absorbing buffer.

Now the banks make a variety of arguments in reply - not all of them consistent. But their main one is that capital is expensive for them to raise. And the more of it they have to hold relative to their loans and investments, the harder it is for them to supply the credit requirements of a recovering economy.

You will have read the claim and counter claim by regulators and bankers on all this so many times in this blog, you may like me be losing the will to live.

So for today I am simply going to make one simple point.

When a bank as big and important as RBS says that the main threat to its performance this year is what the regulators do, you can assume that the punch-up between the bankers and the authorities on how to make the banking system and the economy safer is going to get nastier.

And if you think this punch-up has nothing to do with you, that you are a bemused bystander, think again.

Remember that we as taxpayers own 83% of RBS, and therefore it is of material interest to us whether the value of RBS shares falls or rises.

However far more importantly, the banking crash of 2008 may have condemned us to years of below-par growth. Which is why it is important to us that banks hold enough capital to minimise the risk of that kind of disaster happening again, but that they are not forced to build up their capital so fast that our insipid recovery is choked off into a new slump.