The takeover in 2007 of EMI by Guy Hands' Terra Firma - just as the bubble in financial markets was going pop - will go down in British corporate history as one of the worst ever deals. 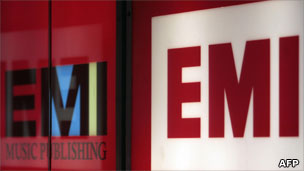 The private equity firm Terra Firma and its backers have lost the entire £1.7bn they put into EMI. And Citigroup, the giant US bank, which provided debt finance for the takeover, has written down what it is owed from £3.4bn to £1.2bn - which means that it has incurred a loss of £2.2bn.

That makes total losses from the takeover of £3.9bn.

Following a decision by EMI's directors that the business was insolvent, the assets have now been transferred to the ownership of Citigroup.

The US bank will sell the company, although sources close to EMI insist that Citi will take its time and there will not be a fire sale.

In the music industry, it is widely believed that EMI's recorded music business could end up owned by Warner Music and EMI's more valuable publishing operation may be sold to another private equity firm, KKR.