Britain: A land fit for multinationals?

Here is the deputy prime minister, Nick Clegg, laying out the scale of economic challenge faced by the government: 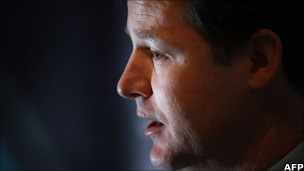 "The model of economic growth fuelled by debt and based on financial services is broken for good."

If you are a banker, you might say yikes - because it rather implies that Mr Clegg is determined to cut the banks down to size, irrespective of warnings of the sort issued today by the CBI that breaking up the banks would be seen as damaging to the interests of the businesses it represents (for what it's worth, many smaller companies tell me they would love to see the megabanks dismantled).

We'll see whether the senior partners in the coalition, the Tories, are quite so gung ho to reconstruct the banking industry.

Do they wish to call the bluff of the banks who warn that their ability to finance the recovery would be undermined and that there would be a permanent loss of the third of Britain's growth routinely provided by financial services till it all went pop in 2007-8?

That said, Mr Clegg's bigger point is that the UK needs a whole new model of economic growth.

So what exactly was the post-Thatcher model which characterised most of the period in office of New Labour? Here were its main elements:

2) Public spending that grew faster than the growth rate of the economy as a whole.

3) Productivity improvements driven by a massive influx of cheap labour, especially from the newer East European members of the EU.

4) A promise by the last government to overseas multinationals that they could buy more-or-less whatever assets or businesses they wanted in the UK.

5) A promise to multinationals that there would not be significant immigration obstacles put in the way of their ability to employ whom they like and when they like in the UK.

6) A pledge to multinationals that congestion at the Heathrow airport transport hub would be reduced.

7) A promise to the City that the regulatory environment for hedge funds and private equity would be as light touch and unintrusive as anywhere in the world.

8) A promise to those on highest earnings that the marginal rate of tax on income and capital gains would be as low or lower than in any other substantial developed economy.

Households typically know they have borrowed too much and are reining in their spending.

We all know what's happening to public spending.

Multinationals can probably still buy what they want in the UK, but their freedom to operate here has been restricted - so their desire to invest has on the margin been reduced (Pfizer says its decision to close down its UK research centre should not be seen as de facto criticism of the business environment in the UK - but it wasn't exactly an endorsement).

A combination of an FSA determined to be a more intrusive regulator, and a growing EU ambition to write rules for every nook and cranny of financial services in the EU, means that London cannot claim to be a place where hedge funds, for example, can any longer frolic with gay abandon.

As for tax, forget the government's plans to cut the corporation tax rate. What obsesses (and I choose my words carefully) those who run larger businesses is the 52% marginal rate of income tax for those on high earnings (a 50% top rate of income tax plus 2% National Insurance).

Now there may be good social and economic reasons to replace those pillars of the economy with new ones - which might be more solid, and which might ensure that more of the fruits of growth go to more people (rather than being scoffed by the top 0.01% of earners).

That said, if the Labour leader Ed Miliband is right to warn that the so-called British promise to the next generation that they'll be better off than us could well be broken, that's probably because it is quite hard to discern how and when the new model of the British economy will be built.

Mr Clegg talks about the imperative of investing more - in infrastructure, in new greener technologies, in education and skills. And he wants the engine of growth to be a national engine, not a London and South East engine.

Few perhaps would disagree with these aspirations.

But when I talk to those who run out biggest companies, I don't hear defeatism, but I do hear reluctance to make substantial investments at a time when the outlook is so uncertain.

This matters for the UK's long term prosperity and for the short term - in that most forecasts of sustained economic recovery in the UK are predicated in part on a substantial enduring rise in private sector investment.

By recent standards, these would be big increases. And maybe they are achievable.

But many smaller companies complain that they simply can't get the credit for investment from the banks that they want and need.

And although some big businesses in manufacturing are making substantial commitments to the UK (in automotive production for example), I can't help but wonder - from my conversations with FTSE bosses - whether we can count on business investment rising at around 10% per annum for the foreseeable future.

Reducing the public sector's deficit and demonstrating that the UK isn't bust may well be necessary to engineer a revival of private-sector investment in the UK (which would be conceded by government and opposition, even if they disagree on the timetable for deficit reduction).

But as Mr Clegg concedes, deficit reduction on its own won't make the UK the natural recipient of multinationals' capital, at a time when they can take their expertise and money anywhere in a financially borderless world.