Varley and Letwin negotiate truce between ministers and banks

The banker trying to negotiate some kind of lasting truce between the government and the banks is John Varley, the soon-to-depart chief executive of Barclays - who (by the way) is the front-runner (so I am told) to be the next chairman of Vodafone, the mobile phone giant. 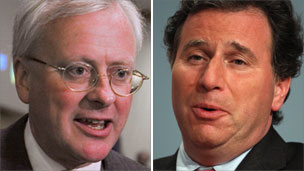 Mr Varley's main interlocutor in this dialogue is Oliver Letwin, the cabinet office minister. And, according to their colleagues, the talks are about the wider questions of how the reputation of banks can be rehabilitated and how banks can make a greater contribution to the UK's economic recovery, and not just what can be done to improve the perception of the quantum of bankers' bonuses.

Now you might think that the boot is only on the foot of the cerebral Mr Letwin, rather than Mr Varley's. But that wouldn't be correct, because so much of what the government wants to achieve isn't possible without co-operation from the banks.

Economic recovery? Well that will be more insipid if banks aren't enthusiastic providers of finance to businesses, especially small businesses.

Shrinkage of an unsustainable deficit? Harder if banks don't recover and don't start making their disproportionately significant payments of corporation tax once again - and harder still if they relocate head offices to overseas financial centres.

Reduction in unemployment? As per the first two points.

Creation of a so-called "big society"? Again, that'll be easier if the banks are keen supporters of the Big Society Bank, which is to distribute the estimated £500m contents of dormant bank accounts to community groups and social enterprises - and which could have disproportionate oomph if banks put a bit more money into it and if it were staffed and managed by secondees from banks.

It shows that - for all the financial support given to banks in 2008 and 2009 to keep them afloat (equivalent to 90% of GDP at its peak) - the banks don't feel like pathetic debtors in their relationship with government.

I am not sure what that means in respect of how meaningful will be the pact that emerges from these talks.

It is likely that there will be a joint statement from the banks on how they'll make sure bonuses and big rewards only go to those bankers who genuinely make a superlative contribution to their profits - and that (as per new EU stipulations) only a fraction of these rewards will be upfront cash payments (as opposed to deferred payment in shares).

So there will be an implication that there will be a crackdown on the widespread practice of paying substantial sums to replaceable, so-so bankers - though it is very unclear how a return to what most would see as sanity in bankers' remuneration would be policed.

Also, and not for the first time since the great banking crisis of two years ago, there are bound to be pledges that adequate credit will be provided to the private sector - together with commitments on supporting the Big Society Bank, and on training and employment creation (which may look a bit odd coming on the heels of more than 40,000 job cuts by RBS and Lloyds since 2008).

In return, the banks say they want an end to ministers sniping at them and criticising them in public. Would that be a fair exchange? Over to you.