What I still feel bemused about is why the Telegraph, for which I used to work, did not publish the one story that would have unquestionably legitimised its under-cover exercise to elicit the private views of Lib Dem ministers. 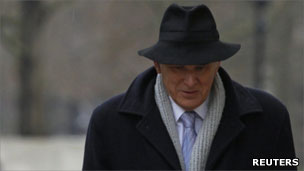 Pretty much everything these Lib Dems have been caught saying about their Tory colleagues is what one would expect them to say to their supporters in private. And readers of my blog, among others, say there are questions to be asked about whether democracy is best served by hounding MPs to such an extent that perhaps in future they will feel safe to speak their minds only in the matrimonial bed.

But Vince Cable's remarks that he had "declared war on Mr Murdoch" were in a different category. And that's not because there is anything special about Mr Murdoch that should protect the media billionaire from the criticism of ministers or from anyone else for that matter.

It's because there was something very special about Mr Cable's legal status as business minister, in respect of his dealings with Mr Murdoch's News Corporation and its attempt to buy the 61% of BSkyB that it doesn't already own.

The important point is that Mr Cable was the final judge - on his own, with almost absolute power - about whether this takeover should be allowed to proceed. This would have been a personal decision, not a cabinet one, under the terms of the 2002 Enterprise Act.

And Mr Cable was supposed to exercise that authority in a dispassionate way, having heard the evidence and listened to the advice of regulatory bodies and his own officials.

So in saying, even in private, that he's out to get Mr Murdoch, he undermined due process: he allowed News Corporation and its lawyers the ability to say, with considerable credibility, that the case was rigged against them (which of course they have said).

Mr Cable's remarks were like a judge telling a defendant that he is going down, weeks before prosecution and defence have presented their cases. They were straightforwardly inappropriate, as the prime minister said yesterday, which is why Mr Cable and his department were yesterday stripped of all responsibility for media policy and regulation.

Why didn't the Telegraph publish these remarks when it exposed much of the rest of what Mr Cable said to undercover reporters overnight on Monday? Why weren't these remarks included in what it called, on its website, a "full transcript" of the secretly recorded interview?

The whistleblower, who yesterday gave me the full recording, told me that the Telegraph's omission of these sections about Mr Murdoch was a commercial decision, motivated by the fact that the Telegraph - like Mr Cable - would rather News Corporation does not end up as 100% owner of BSkyB.

I of course put this to the Telegraph. And rather late in the day, at 19:19 last night to be precise, the Telegraph's external media adviser sent me a statement attributed to an unnamed "spokesman for the Daily Telegraph". The statement says:

"It is utter nonsense to suggest that the Daily Telegraph did not publish comments from Vince Cable on the Rupert Murdoch takeover of BSkyB for commercial reasons. It was an editorial decision to focus this morning on Cable's comments on the Coalition because they were of wider interest to our readers".

Well, some would say that was a slightly eccentric editorial decision for an editor, Tony Gallagher, widely regarded as one of the sharpest in the business. I rang Mr Gallagher to discuss this, but he directed me to the Telegraph's internal PR spokesperson.

Also, you may have noticed that the Telegraph has not yet put out any clear and unambiguous statement that it was ever planning to publish Mr Cable's remarks about Mr Murdoch (though it has now published them, after they were put out by the BBC).

Maybe I am being a bit naive and silly to think any of this matters. Maybe most of you think that what we do as reporters is so obviously and constantly subject to commercial interference that there is no particular benefit to be gained from asking the Telegraph to explain itself in this case.

But actually that's not been my experience in 27 years as a hack. And I still think the question of what news organisations put into the public domain, and how they do it, matters.

And there is one other thing. Which is that we have surely learned beyond reasonable doubt that it is quite difficult for any single individual to be dispassionate about Mr Murdoch and his expansionist ambitions.

Some love him, some hate him.

And since it surely matters to democracy who owns our major providers of news and mass culture, is it really sensible that a single politician should have the final say about whether a takeover as important as that of BSkyB by News Corporation should go ahead?

The Culture Secretary, Jeremy Hunt, will doubtless endeavour to be impartial in that adjudication, now that the power has been passed to him.

But if he allows News Corporation to own all of BSkyB, critics of Mr Murdoch - and they are not small in number - will accuse Mr Hunt and the government of repaying the support given to the Tory Party by Mr Murdoch's newspapers in the last election.

Even the perception that favours can be earned in that way is bad for the reputation of government.

Which is why there is probably a debate to be had about whether media takeovers should become subject to the same rules as almost all other takeovers - which is that ministers have no say at all, and decisions on whether to allow deals are taken by independent regulators (who are, of course, accountable to parliament, but not to the executive).