Brown: 'We have a major crisis in the euro area'

Gordon Brown says that the eurozone will not solve its current financial crisis unless it opts for a comprehensive and substantial rescue package, that would involve putting tens of billions of pounds of new capital into the eurozone's banks. 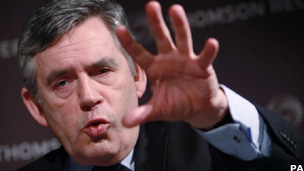 The former British prime minister said, in an interview I've just done with him, that the enormous liabilities of the eurozone's banks are a serious and substantial accident waiting to happen.

"I sense that in the first few months of 2011 we have a major crisis in the euro area... You've got fiscal deficits, obviously. But you've also got massive banking liabilities in the euro area, and that's not just the peripheral areas. It's the core areas of Europe where banks are really under pressure because they have lent huge amounts of money but have no guarantee they have the capital that is necessary to sustain themselves in all positions.

"But then you've also got this impediment to growth. The euro area is inflexible because you can't adjust your currency... The structural reforms that are necessary to make a single currency area work have not been completed and in some cases have not been agreed. And therefore you've got to have a nigh noon...You've got to deal with these problems in one fell swoop... They've got to do it in a way that seizes the initiative from the markets... It's got to happen in the first months of 2011."

His fear is that the current process of bailing out one over-stretched eurozone country at a time (Greece followed by Ireland, so far), rather than going for a once-and-for-all bailout scheme for the entire eurozone and all its banks, will elongate and maximise the economic pain for eurozone members. In those circumstances, international investors would "pick countries off (for punishment) one by one".

He added that "if the euro were to break up, the political and economic consequences for all the countries would be disastrous" and the cause of global economic co-operation would be set back for years.

Also, if there is no comprehensive and credible rescue and reform package for the eurozone, he feared that European countries would - at best - be condemned to years of low growth and high unemployment. This would damage the UK, which conducts 50% of trade with eurozone members.

Mr Brown's intervention matters, partly because he remains in contact with other European leaders - and partly because he is saying what members of the British government and senior officials at the Bank of England also believe but cannot say (for diplomatic reasons).

He is pessimistic about the short term outlook for the global economy, because of what he sees as a rise of nationalist and protectionist tendencies in many countries, similar to what happened in the Great Depression of the 1930s.

The central theme of his new book, Beyond the Crash, is that the US and Europe will be condemned to years of low growth unless and until the world's biggest economies co-ordinate their economic policies and their approaches to financial regulation, not just to tackle individual crises but on a permanent basis.

For banks in particular he calls for a new "global banking constitution", that would go further than the current Basel agreement on capital to set rules and standards for all the world's banks, over-riding national regulations.

I reminded him that years ago, when he was at the height of his reputation as chancellor, I asked him why on earth he wanted to risk his then formidable reputation by becoming prime minister. Did he now regret having moved into No 10?

If he had a regret, he said, it was that he had failed to convince the electorate of the overwhelming importance (as he see it) of a great worldwide initiative to restore momentum to the global economy.