How much capital do Ireland's banks really need?

There's a funding crisis in the eurozone, inflation in China and anaemic growth in the US.

That's a pretty lethal combination when it comes to investors' appetite for risk.

Or to put it another way, there are reasons to believe that a global recovery in the price of shares and riskier assets may have come to an end - and it is far from easy to predict when it will resume.

As for the minuscule but potent nexus of this turmoil, the Irish financial crisis, the news overnight isn't good.

The ratings agency S&P has downgraded Irish sovereign debt by a couple of notches - which is yet another blow to the price of Irish government debt and the ability of the state to fund itself.

There will be many who will bemoan the continued influence of ratings agencies such as S&P, the fact that their ratings are "hard-wired" into the system that determines whether governments and vital institutions can raise money: the G20 leaders have pledged to reduce the power of the agencies, but have so far actually done precisely zip (a big hello to that galloping horse and the wide open barn door). 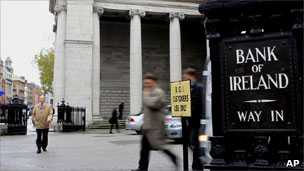 Against this background of risk aversion and the painful trial that lies ahead for the Irish state in trying to regain credit-worthiness, what kind of ratio of capital to assets would actually persuade commercial banks and investors to lend to Irish banks - and would stand a chance of breaking the vicious connection between the funding crisis of the banks and the funding crisis of Irish government?

The IMF, European Central Bank and European Commission - who are in Dublin divvying up €35bn of rescue funds for Ireland's banks and €50bn to fill the state's direct funding gap - are signalling that a ratio of 12% might do it:so that would require Ireland's big banks to hold equity capital equivalent to 12% of their loans and investments, as protection against future losses.

The current capital ratios of Bank of Ireland and Allied Irish Banks are a good deal less than 12%, so they would need to raise billions of euros of additional capital. AIB could only get this from the IMF/EU rescue fund, so it would become - at best - a whisker away from 100% nationalised.

As for Bank of Ireland, it would be largely nationalised, unless it can somehow persuade its long suffering investors to stump up a colossal amount of risk capital (which is even less likely than my team, Arsenal, breaking its long run of trophy-less seasons - yes, I'm in pain).

Even so, it's not obvious that a 12% ratio of capital to assets will reassure lenders enough such that there's any chance that they'll start lending to Irish banks again, or stop withdrawing their credit, on any useful timetable.

And the reason is Swiss. What I mean by that is that the Swiss authorities have recently ruled that the two biggest banks in Switzerland must hold equity plus bonds that automatically convert into loss-absorbing equity when needed that would be equivalent to 19% of assets.

Now there are similarities and differences between the Swiss banks and the Irish banks. The important similarity is that the domestic market shares of UBS and Credit Suisse, on the one hand, and Bank of Ireland and AIB, on the other, are pretty similar. Or to put it another way, UBS and Credit Suisse are huge in Switzerland, whereas Bank of Ireland and AIB are similarly vital to the functioning of the Irish economy: the argument of the Swiss, which many would find compelling, is that banks deemed more important to the functioning of an economy should be forced to hold relatively more capital than less important banks, because those systemically vital banks can't be allowed to fail.

Then there are important differences: Bank of Ireland and AIB have concentrations of risk, in the fragile property and housing markets, well in excess of UBS and Credit Suisse; Switzerland has one of the strongest economies in the world, and Ireland (ahem) doesn't; the credit of the Swiss government isn't in doubt (and you know what investors currently think about the Irish government's ability to repay all its debts).

So if 19% is the right ratio of capital to assets for UBS and Credit Suisse, it is possible to argue that 25% or more would be appropriate for Bank of Ireland and AIB.

Is that in fact where the IMF, ECB and European Commission will end up, when they finish their review of Ireland's financial requirements?

Well, it's not impossible. There are those at the IMF and ECB who will see the logic. But it would be very tricky for European governments to see Ireland's banks capitalised to that extent - because it would serve to highlight the number of other banks in vulnerable eurozone economies that have relatively little capital.

In other words, putting the ideal amount of capital into Ireland's big banks would raise the potential costs of any future rescues of eurozone economies and banking systems that may be needed.

On the other hand, some would argue, if the Irish economy and its banks are going to be rescued, better to do it properly, in a completely watertight way, rather then leave nagging doubts that the repair is a bit of a botch.

Update, 15:30: At the press conference announcing Ireland's National Recovery Plan, the finance minister Brian Lenihan gave a little bit of extra detail on how 35bn euros of IMF and EU money will be deployed to help Ireland's banks.

As we know, a chunk of this will be invested in Ireland's banks, to augment their capital resources, their shock absorbers against losses.

But Mr Lenihan said there would be two other dimensions to the rescue.

Ireland's toxic bin for the banks' lossmaking loans, the National Asset Management Agency, will be expanded, so that the balance sheets of Allied Irish Bank and Bank of Ireland can be shrunk and sanitized.

Also, Mr Lenihan acknowledged that Ireland's scheme for guaranteeing the borrowings of the banks, the Eligible Liabilities Guarantee Scheme, isn't providing the reassurance to lenders that it might, so it will have to be strengthened - presumably by putting the resources of the IMF and the EU behind the scheme.

PS As if the Irish haven't sacrificed enough, the Irish government has announced that it will create a new four-year "Solidarity Bond" so that the Irish people can lend to their government, to help fill that yawning gap between public spending and dwindling tax revenues.

What the government doesn't say is whether the terms and interest rate on this bond will be better or worse than the terms that'll be demanded by the IMF and EU on the credit they're providing.

Also there will be legislation to allow Ireland's sovereign wealth fund, the National Pensions Reserve Fund, which has just under 25bn euros of resources - a tidy sum - to "support the Exchequer's funding programme to the extent required".

Or to put it another way, if Ireland can't borrow from commercial investors, it will be able to borrow from the state's captive investment fund, so that Ireland's pensioners of tomorrow can bail out the public-sector employees of today.

Update 1705: Bond markets have given a massive thumbs down to the Irish National Recovery Plan, which rather implies that investors don’t think it’s deliverable in Ireland’s traumatic political climate.

As for strike-riven Portugal, whose banks (like Ireland’s) are excessively dependent on central bank support (to the tune of more than 8% of their liabilities, on my estimates), its 10-year government bonds are yielding 7%.

Meanwhile the yield on the Spanish 10-year has crept over 5%, for the first time since 2002.

When benchmark bond yields rise in this way, there’s a knock-on to the funding costs of banks: it becomes more expensive for banks to borrow.

So to return to my boring refrain of late, this little local Irish difficulty still has the potential to wreak havoc across the eurozone and beyond.

Now normally in circumstances like these, when investors become anxious about risks, there’s a flight into supposedly uber-safe German bonds. That hasn’t happened today: the yield on the “bund” (traders’ vernacular for the German’s 10-year) has risen a bit, from 2.55% to 2.71%.

What should therefore perhaps worry the German government is that anxiety about the finances of Ireland and Portugal is infecting even the perceived credit worthiness of Germany (well, on the margin anyway).