How big is Europe's crisis?

This morning has felt a bit like a surreal dream.

On the one hand a couple of fairly substantial economies, Ireland and Portugal, are teetering on the brink of collapse. 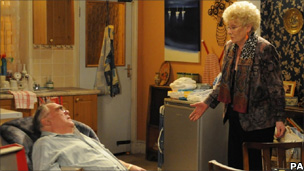 A vision of Vera Duckworth

On the other, a raft of results from British businesses - ITV, Easyjet, Burberry, British Land - show that for big companies at least, recovery is real and not as anaemic as statistics for the whole economy imply.

The growth in advertising revenues at ITV, up 16% to £1.25bn in the first nine months of the year, is particularly striking. And if ITV's former chairman, Michael Grade, doesn't point out - and very publicly - that he left ITV in better shape than many have claimed, then I know nothing about the soap opera of the television industry.

Also, the irrepressible Nat Rothschild - he who went to war with George Osborne over who said what in Corfu - is at it again. His new listed mining vehicle, Vallar, is splashing out a short £2bn to buy coal mining assets in Indonesia, which - after a bit of incremental investment - will propel Vallar to membership of the FTSE 100 index.

So the big dogs of commerce are wagging their tails again and looking for prey. The question, of course, is whether the return to growth at larger companies is sustainable, or whether it's a bounce on terrain that is about to crumble.

What the inhabitants of boardrooms will surely have noticed is that the G20 didn't come anywhere near last week to fixing the structural flaws in the global economy - whether those flaws are the unsustainable deficits of developed countries (of which the US is prime exemplar), matched by the equally unsustainable surpluses (many would say) of Germany and China, or treacherous asset bubbles pumped up by abnormally low interest rates and QE in the US and UK.

And what about the woes of Ireland and Portugal? Well, looked at in one way they look trivial for substantial global businesses: the forecast growth (just the growth) in China's nominal GDP of about $1 trillion dollars over the coming year is roughly double the size of the entire combined Irish and Portuguese economies.

So Nat Rothschild would argue, presumably, that what happens to a couple of minor European economies is irrelevant to him - since the coal he'll be producing in Indonesia will be gobbled up by hungry China.

But if, as the EU's president Herman van Rompuy says this morning, it's the very survival of the eurozone that's in the balance, well that's of greater moment - even to China.

One way to gauge the heft of the moment, so to speak, is to look at the total exposures of overseas banks to the banks, private sectors and public sectors of those European economies which have borrowed rather more than they can probably afford to repay.

Here are the relevant numbers: non-domestic bank exposure (that's the exposure of overseas banks to public, private and banking sectors) is around $300bn for Greece, a little bit more for Portugal, and $840bn for Ireland. That's around $1.5 trillion (£930bn) in total, twice the value of the aggregated economies of Greece, Portugal and Ireland, or three-quarters of Britain's GDP.

Let's assume, which is reasonable, that a meaningful portion of that $1.5 trillion can never be repaid, because some part of the collateral backing those loans has been lost forever (property prices, for example, simply won't recover fast enough) and the earning capacity of the Greek, Portuguese and Irish economies isn't enough to meet the difference.

Even so, the potential loss on that $1.5 trillion exposure for banks would be manageable (if painful) so long as there is an orderly process of establishing what can be repaid - and then reconstructing the quantum and payment schedule of the debts on that basis.

What would be a disaster - and this is reflected in the emotional comments of Mr van Rompuy and of Portugal's finance minister, Fernando Teixeira dos Santos - would be a disorderly, piecemeal process of public and private sector defaults, especially since that would be bound to undermine the financial credibility of other much bigger eurozone economies, such as Spain and Italy.

To simplify where we stand, the global financial system has recapitalised sufficiently over the past couple of years to absorb the losses of a controlled workout of the excessive debts in the eurozone's weaker economies - but there would be a serious risk of a new credit crunch, and global recession, if the providers of that $1.5 trillion of credit to Ireland, Portugal and Greece were to lose confidence that there will be a controlled workout and were to ask for their money back now.