The first time I heard birdsong on this or any of my trips to Beijing was today, when I interviewed the Chinese Commerce Minister, Chen Deming. 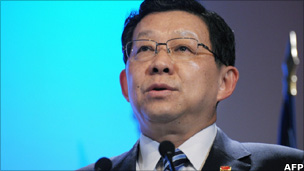 The interview took place in a magnificent and tranquil government-owned estate, the Diaoyutai state guesthouse - where Britain's Chancellor of the Exchequer, business secretary and energy secretary were holding talks with their Chinese opposite numbers - right in the middle of this crowded noisy city.

In a boardroom the size of a basketball pitch, whose walls are papered in gold and which looks over a willow-fringed lake nourished by bubbling waterfalls, I asked Mr Chen whether he accepted that imbalances - China's substantial surplus and the US deficit in particular - are sources of global economic instability.

As it happens, I asked George Osborne, the Chancellor, the same question last night, when I interviewed him in his perfumed cavernous palace of a Beijing hotel.
No surprise - their answers could not have been more different.

Mr Osborne said he viewed the imbalances as the fundamental cause of the Great Recession of 2008-9. And he added that it was a great priority to reduce the deficits of deficit countries - like the US and UK - and to see a corresponding reduction in the surpluses of countries like China and Germany.

Mr Chen, by contrast, rejected the premise of the question.

Or to put it another way, he refused to accept that China operates an unsustainably large trade surplus.

He pointed out that China actually buys more from many countries in Asia and Africa than its sells to them - which reflects its hunger for commodities and high tech products.

Mr Chen also insisted that as a percentage of GDP China's surplus with the whole world in aggregate is modest - and in so-called "cargo" trade in physical goods is insignificant.

That's as maybe. And certainly there has been a sharp fall in China's current account surplus, from 9.6% of GDP in 2008 according to Goldman Sachs, to a forecast 5.5% this year.

But few would argue that a 5.5% surplus is trivial, because in the boom years before the credit crunch the corollary of large surpluses in China, Germany and Japan was the dangerously rising indebtedness in the US, UK, Ireland and some other mature economies.
So if there is an issue here, according to Mr Chen, it relates to China's trading relationship with one country only.

No prizes for guessing which one: it's the US, whose deficit with China, according to Mr Chen, is greater than China's net deficit with all countries.

Mr Osborne would slightly demur from this view. He thinks that the UK's £17.1bn current account deficit with China is a bit of a problem too.

But the chancellor is probably a bit more optimistic than most US politicians that China's economy is set to be reconstructed over the next few years such that consumption will play a far bigger role in generating growth - which should create valuable new markets for British goods and services, especially for the services in which the UK has a genuine competitive edge (architecture, accounting, insurance, law, education, advertising and so on - and you can whisper the word "banking", if you dare).

On Britain's trading prospects, as it happens, Mr Chen had a few spiky words for UK businesses. British brands are far less familiar to Chinese consumers than Italian and French ones, he said, and need to be promoted much better.

And he was scathing about the alleged inability of British tailors and shirtmakers to export jackets and shirts with short enough sleeves for Chinese men. When he spoke to a British manufacturer about its failure to customise its clothes to suit the typical Chinese man, this manufacturer allegedly said that it expected Chinese economic progress to be accompanied by a lengthening of Chinese arms.

I hope that was an example of official Chinese wit. But Mr Chen's big point, for America - and to a lesser extent for the UK too - is that the American and British governments are largely to blame for their deficits with China.

He says that China wants to buy tons more high tech stuff from both countries, but is prevented by prohibitions on the sale to China of kit that could have a military purpose.

This irks him, because - he says - China wants the hardware and software for peaceful purposes.

He also points out that much of America's deficit is simply the consequence of its own companies outsourcing their production to low-cost China.

Anyway when I raised the question of whether it mightn't be an idea for China's authorities to let the Chinese currency, the Renmimbi, float up a bit more than the 3% or so it has risen against the dollar since the peg was relaxed in June, I received what can only be described as a "stupid boy, Pike" look.

Or to translate for the few of you who've never watched Dad's Army, Mr Chen is adamant that the trade surplus - which he says doesn't exist anyway - would not be eliminated by allowing the Renmimbi to find its natural market level.

All of which rather confirms what Mr Osborne said to me, which is that this week's G20 summit in Korea will make only limited progress on agreeing measures for rectifying the irksome and destabilising imbalances in flows of trade and capital.

So if you happen to think that global economic growth will remain weak and fragile unless and until there is a serious meeting of minds from world leaders on how to eliminate those surpluses and deficits, well you should probably be a bit downcast.