Although it's been a trip of 18 hour working days, and hurried noodles at midnight in a 24-hour cafe which (thank goodness) shows live football (though I would have preferred to have missed Flappyarmski v Andy Carroll), I'll miss China and Beijing.

It's a cliche, I know, but it's nonetheless true that it's impossible to take your eyes off the scale of change here, or be unimpressed by it.

Which is why China optimists remain convinced that for all the structural challenges still facing this country - the widening gap between rich and poor, a rapidly ageing population, the tension between growth and environmental protection, and (the theme of much of my work on this trip) growth still too dependent on investment rather than domestic consumption - these challenges will in time be overcome.

Along the way, however, this is a country which has a propensity to take adverse trends close to the brink of disaster.

The pumping up of a residential property bubble, as illustrated by such phenomena as the creation of the peopleless city (see my note on Kangbashi), appears to be one such trend.

This bubble is a consequence of the enrichment of a new and growing middle class facing huge restrictions on where they can invest their money.

With interest rates so low and restrictions on investing abroad, buying new apartments is one of the few investments available to the new monied class.

But here's the thing that appears odd to westerners: many of these property investors prefer to buy these apartments and leave them empty rather than rent them out. 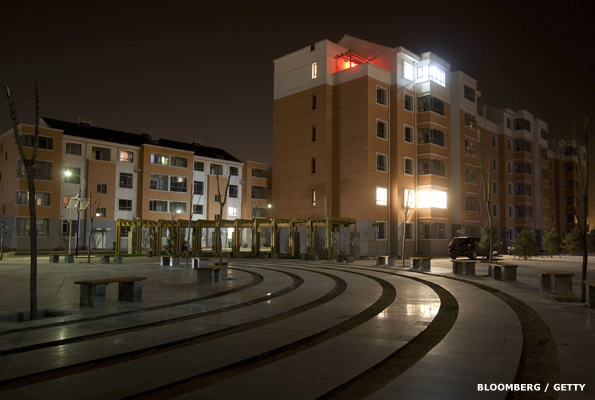 Which is why all over China, as manifested in Kangbashi in extreme form, residential property developments have been sold, but yet remain largely unoccupied.

What will jar in buy-to-let obsessed Britain is that large numbers of apartments can remain vacant in a country where urbanisation, the migration of many millions of impoverished peasants to cities, is one of the so-called mega-trends.

The explanation, according to a Tsinghua University economist, Patrick Chovanec - corroborated by locals - is that Chinese people regard apartments as they would cars: brand new is good and top price; used is bad and lower price.

Apparently, the moment someone moves into a property, its price falls, because it's no longer pristine.

So property investors have little desire or incentive to rent out their properties, because to do so would be to cut the re-sale value. Better to keep them empty in the hope that a rising market will deliver capital gains.

Which means there's nowhere to live for those who have only the means to rent rather than buy - and large (but unquantified) numbers of homes are empty.

In a country where hundreds of millions still live in poverty, this feels like something of a social tragedy, as well as a classic market failure.

There is no hard data on the number of these vacant properties. The best way to gauge it is to travel around almost any urban area and see how few lights are on in new developments (not many).

I am sure that the Chinese authorities would deny that this property bubble is a major social or economic problem. But they have recognised it exists by making it more expensive to borrow to purchase multiple homes.

The good news is that this bubble isn't a banking risk in the sense that it would be in the UK or US. Many, but not all, of these properties have been bought for cash. So if the bubble is popped, there shouldn't be enormous losses for banks that undermine their solvency.

But of course, if the cycle of rising asset prices were to go dramatically into reverse - and there are signs that the froth has already come off the property market - that would cause problems for developers and investors, which could then impair the quality of bank loans.

Anyone who says they know this is a huge accident waiting to happen is going on hunch because - as I say - there is something of a fog around this market.

But it would be myopic or dim to deny that a bubble - and potentially a highly dangerous one - is the inevitable consequence of a historically unprecedented mass movement of personal enrichment combined with severe restrictions on how and where the newly enriched can invest their cash.