Why ask a billionaire about being economical?

Why did the government ask Sir Philip Green to look at whether he could find some significant savings in the costs of providing public services? 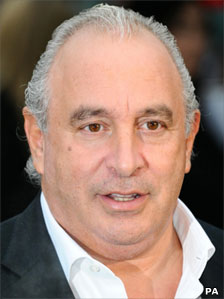 After all, the billionaire commuter between Monaco and London sells blouses, knickers, cuddly toys and table lamps; and the public sector educates our children and removes our gall stones.

Some would say that asking Green to advise on making the public sector more efficient is like asking the manager of a highly successful football team to run the Red Cross: it might work, but the difference in culture, scale and complexity between the business of government and the business of business presents significant challenges.

There is logic, however, to seeking his counsel.

Green is a leading exponent of buying big businesses that have been losing ground, and then making a fortune out of them by improving their productivity - which means both cutting costs and growing sales. In fact, in the UK, he is the non-pareil of stabilising and extracting cash from retail brands that are going a bit brown around the edges.

Arguably, David Cameron and Nick Clegg can be seen as having executed a similar takeover, that of the debt-encumbered apparatus of the British state.

They would certainly argue that their need to cut public expenditure and improve the efficiency of public services is as great as his need was at Bhs,Top Shop and Burton to boost the return on sales and invested capital.

Or to put it another way, the driving forces for Green and Cameron/Clegg are the same: the imperative of reducing the burden of debt.

Green finances his takeovers with colossal amounts of debt that have to be paid off as quickly as possible; Cameron/Clegg inherited national debt that is rising unsustainably fast because of the huge gap between what the government spends on public services and what it receives from tax revenues.

So why not ask the private-sector maestro of paying off takeover debt how he thinks the gap between spending and revenues can be closed without damaging the quality of the services provided?

After all, many of the overheads of his businesses are the same as the public services' overheads: they include everything from property, to telecoms, to travel, to power, to IT, to paper clips.

We'll know tomorrow how much wasted spending he thinks can be eliminated in a sprawling public sector from eliminating unnecessary expenditure and striking better deals on necessary purchases.

There is however one cost of doing business, tax, that Green and most private-sector enterprises strive to cut - and where their effectiveness in doing so can be seen as running counter to the interests of the public sector.

He famously saved £300m in tax in 2005 on a £1.2bn dividend from his company, Arcadia - because Arcadia is registed as owned by his wife Tina, who is resident in the tax haven of Monaco.

These days he likes to accentuate the substantial tax paid to the Exchequer by his businesses.

But (to state the obvious) if all businesses and wealthy individuals could somehow be persuaded to devote less time and effort to minimising their British tax payments, rather smaller cuts in public services would be required to restore the health of the public finances.

Perhaps the enlistment of the likes of Sir Philip Green to advise on remaking the public sector will persuade business leaders that paying taxes represents reasonable value for money. We'll see.

Update 0800, 11 October: There is a paradox at the heart of the short preview - published overnight - of Sir Philip Green's recommendations to make the public sector a better buyer of goods and services.

He argues that the government purchases too little centrally, which means it doesn't use its buying power and doesn't get the keenest terms from suppliers of everything from travel, to IT, to telecoms, to stationery.

The retailing billionaire also says that the public sector doesn't take full advantage of its AAA credit rating - which implies, somewhat controversially, that it pays its suppliers rather quicker than it needs to do.

If ministers follow up on what he recommends, that'll help them close the yawning unsustainable gap between what they spend and tax revenues.

Who'll be the losers? Well in theory they'll be the private sector suppliers to government, who have both been arguing for the government to become more efficient and whose profit margins would be quite considerably squeezed.

I'll be getting more detail on all this in an interview with Sir Philip later this morning.