Let's call it Kopside, the soap opera of Liverpool Football Club's attempts to find a new owner and avoid being placed into administration. 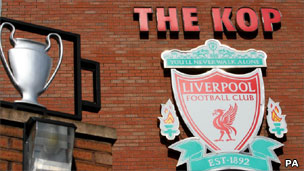 With just 10 days left before Royal Bank of Scotland would seize control of the club as its main creditor, the club has announced that it is negotiating with two bidders it regards as credible, one of which is the owner of the US Boston Red Sox baseball team, John Henry.

These bidders are prepared only to offer between £250m and £300m, enough to pay off Liverpool's bank creditors, led by Royal Bank of Scotland - but not enough to provide any recompense to the club's current owners, Tom Hicks and George Gillett.

So in an apparent attempt to frustrate the takeover, Mr Hicks and Mr Gillett have sought to remove two Liverpool directors, Christian Purslow and Ian Ayre.

But their tactics are dangerous - because Royal Bank of Scotland has made it clear that if no takeover is agreed by next Friday, it will put the club into administration and then sell it to on.

RBS's resolve to do just that will have been reinforced by the disclosure that there are two bidders with the resources to pay off all long term debt.

As I've mentioned before, if Liverpool goes into administration Mr Hicks' and Mr Gillett's investment in the club of £140m or so would be totally wiped out.

Messrs Hicks and Gillett look as though they're perched precariously between the devil and the dark blue water - or are they being squeezed between the inhabitants of the Kop, who detest them, and the occupants of the Anfield Road Stand, who loathe them?

That said, the club's chairman, Martin Broughton, would like to avoid administration if possible - since the automatic deduction of nine points from Liverpool's derisory Premier League tally would make it difficult even for a revitalised Liverpool to break free of the relegation zone.

Update 0751: It now looks pretty certain that New England Sports Ventures will add the Reds to their stable of sporting assets, which include - as luck would have it - the Boston Red Sox.

What is unclear is whether John Henry's US sports conglomerate will buy Liverpool Football Club in a conventional transaction, as a going concern, or whether Liverpool will yet be forced into administration under insolvency procedures - and under those circumstances New England Sports Ventures would buy Liverpool from Royal Bank.

The uncertainty arises from attempts by the current owners, George Gillett and Tom Hicks, to block the deal - which would repay the £280m owed to RBS and the US bank Wachovia, but would deliver nothing to messrs Hicks and Gillett.

Because of the opposition to the deal of Mr Hicks and Mr Gillett, the ignominy of administration - which would see Liverpool lose nine Premier League points - remains very much a live option for this proud club.