Why Ireland can't afford to punish reckless lenders to its banks

The only time I was taken aback when interviewing the Irish finance minister Brian Lenihan on Friday was when he said - with striking passion - that he did not wish to see losses for international banks and other financial institutions that have lent to Ireland's bloated, ailing banks.

More or less the same point, that Irish banks' wholesale creditors must be protected from the error of their lending ways, was delivered to me with equal vehemence by Peter Sutherland, the grandest of Ireland's globetrotting financial grandees (at various times chairman of BP, chairman of Goldman Sachs International, a European commissioner, director-general of the precursor of the World Trade Organisation, and so on and so on).

We can assume this is the view of the Irish political establishment, since Sutherland is not a supporter of Lenihan's weakening Fianna Fail government.

Which may strike you as a bit odd, given that Ireland's economy has been taken to the brink of bankruptcy, by the reckless lending of its banks to property developers, home builders and house buyers - and that this reckless lending wouldn't have been possible if the banks themselves had not been able to obtain cheap money from overseas banks and institutions.

So there is a strong argument that since Irish taxpayers are incurring huge and rising losses to clear up this mess, the pain should be shared with all the guilty parties, who surely include the sophisticated financial professionals at foreign banks that foolishly provided Irish banks with the means to mortgage an entire economy. 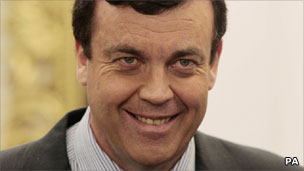 But here's why for Lenihan, Sutherland and Ireland's mainstream political class it is heresy to adopt a policy of caveat emptor (or buyer beware) to the distribution of banking losses: Ireland's dependence on credit from abroad is so great that the economic consequences of that credit being withdrawn would be catastrophic.

Take a look at the latest figures from the central bankers' bank, the Bank for International Settlements, on just the exposure of overseas banks to Ireland (in other words, credit provided by pension funds, hedge funds and wealthy individuals would be on top of this).

Total foreign bank exposure to Ireland's economy is $844bn, or five times the value of Ireland's GDP or economic output. Of that, German and UK banks are Ireland's biggest creditors, with €206bn and €224bn of exposure respectively.

To put it another way, German and British banks on their own have each extended credit to Ireland greater than Irish GDP. Which doesn't sound altogether prudent, does it?

As for direct bank-to-bank lending, overseas banks have provided Ireland's banks with €169bn of loans, which is also greater than Irish GDP.

Here's the point: an economy as open and as dependent on foreign finance as Ireland's cannot afford to alienate its creditors. If those overseas lenders asked for their money back now, Ireland's recent fall back into a modest economic contraction could spiral into dark deep prolonged recession or even depression.

There are two big conclusions to be drawn. First Ireland's inability to let market forces take their course will be seen by many as another example of why the banking industry has lost any semblance of right to operate according to normal commercial freedoms.

Second, the Irish economy is hideously and perilously balanced between recovery and Armageddon.

The Irish government has extended till the end of the year its formal guarantees to protect from losses more than €400bn of retail and wholesale loans to Irish banks (banks' subordinated debt is excluded).

But, to state the obvious, those guarantees are only reassuring to creditors if the Irish government is perceived as able to honour its own debts.

The credit-worthiness of the Irish government is largely dependent on two related factors: the delivery of its promise to reduce the public-sector deficit from an unsustainable 14.3% of GDP in 2009 to less than 3% of GDP by the end of 2014; the stabilisation of losses at Irish banks that are being underwritten by the government.

Here's one of many paradoxes about the Irish crisis: the losses at Irish banks are being crystallised by the activities of a fund set up by the Irish government, called the National Asset Management Agency (NAMA), to buy an estimated €80bn of bad loans from the banks.

NAMA tries to buy these loans at the price which captures how much will eventually be repaid by overstretched borrowers. And the average price it paid for the first €27bn of transfers was 47.5 cents per euro of debt.

Which means that the banks on average lost €14.2bn on these transfers to NAMA.

In one way, it looks like good news for the Irish taxpayer that NAMA is purchasing these dodgy loans at the market price.

Except for one thing. The huge losses incurred by the banks on the NAMA transfers deplete banks' capital - which then has to be topped up by (you guessed it) Irish taxpayers and the National Pension Reserve Fund, a state pension fund created for the long term benefit of Irish citizens.

The government has already nationalised the most breathtakingly imprudent lender, Anglo Irish Bank, into which it has injected €23bn. And later this week, Mr Lenihan is expected to announce how much more capital needs to go into Anglo Irish (Mr Lenihan wouldn't disclose the size of the future financial injection, but it'll certainly be a good few billion euros).

There is also a reasonable probability that the state, through the National Pension Reserve Fund, will end up as the majority owner of Allied Irish Banks: AIB is being obliged to raise the ratio of its equity capital to assets to 7%, and may only be able to achieve this if the National Pension Reserve Fund converts all or part of its €3.5bn of preference shares into ordinary shares.

All of which is to say that the banks and the Irish state are more-or-less one and the same thing right now. And the greater are the banks' losses, the greater the strain on taxpayers.

What will determine those losses - in part - is whether house and property prices stabilise after their 40 to 60% falls since the end of 2006. It hasn't happened yet, though the rate at which prices are falling has slowed down.

Of course, the great fear for the Irish government is that its putative virtue in making deep public spending cuts - and Mr Lenihan conceded that there are some big and painful decisions ahead - will further undermine confidence in the value of Irish assets, triggering further losses at banks, and thus eliminating the fiscal benefits of the deficit reduction programme.

Or to put it another way, it will be many months yet before Ireland can be certain it's over the worst.

That's presumably why Mr Lenihan didn't rule out in his interview with me that the Irish government might eventually be obliged to ask for financial support from the European Financial Stability Facility, the special €440bn fund set up by eurozone members to lend to financially challenged eurozone states.

Naturally Mr Lenihan doesn't want the national humiliation for Ireland of being the first eurozone member to tap the special bail-out fund set up after Greece went to the brink of insolvency in the spring.

Nor does he expect it.

But he daren't say no, nay, never - for fear that those all-important overseas creditors lose confidence in the existence of backstop insurance to cover their cripplingly huge claims on the Irish banks and the Irish state.