It will matter to millions of current and future pensioners that the government is taking steps to uprate what they receive from private occupational schemes by consumer price inflation (CPI), rather than retail price inflation (RPI). 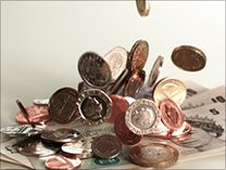 How much will it matter?

Well, in theory quite a lot, because the RPI has risen rather more than the CPI since the CPI began to be calculated some 22 years ago.

If a person starts drawing a pension at 60 and lives till they're 82 - which is not unrealistic on the basis of current mortality rates - that person would be receiving 16% less cash in the weeks before they died under CPI up-rating (on the assumption that CPI and RPI diverge over the next 22 years in the way they did over the past 22 years).

Which is a serious sum of money when expressed in that way - and for those on low pensions, could be the difference between hardship and comfort.

As for pension funds that are in deficit, that 16% fall in what they'd pay out to each pensioner would be seen as a welcome fall in their overall liabilities - though probably not enough to transform a sick pension fund, such as the Royal Mail's with its £10bn deficit, into a healthy one.