The stress tests of 91 European Union banks - whose results we'll be given on Friday - are built on a paradox that some will see as delicious, and others as insane. 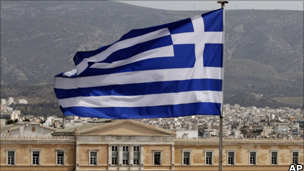 That paradox relates to the treatment of sovereign debt, the borrowings of governments like that of Greece that have taken on financial commitments way beyond what looks prudent.

Now these assessments of the financial strength of banks allow that the market price of sovereign debt may fall. In the case of Greece, banks have been instructed by regulators to factor in falls in the price of that debt of around 23 or 24% (a bit more than regulators first indicated).

So if banks hold government bonds, such as those issued by Greece, in their so-called trading books, then those banks have to prove that they are strong enough to withstand fairly substantial losses on those bonds.

But the European Union's governments, central bankers and financial regulators are not prepared to admit the possibility that an EU government could actually default on its debts - even as part of the totally theoretical exercise of the stress tests.

So if banks hold government bonds, such as Greek government bonds, in their "banking" books - and thus intend to hold those bonds till they mature or come up for repayment - then those banks would not have to recognise even 1% of potential loss on their bond holdings.

And never mind that analysts fear Greece will ultimately be forced to write off some 50% of its national debt.

Now I've highlighted this contradiction in an earlier post (see Eurozone stress tests that stress investors). And I made the point that this refusal to admit the possibility that Greece (or Spain, or Portugal, or Italy, or even the UK) could default means that it's impossible to be confident that Europe's banks hold enough capital to withstand potential future losses.

But what's worse, in a way, is what this dichotomy reveals about EU attitudes to markets. On the one hand, the leaders of Europe concede that the price of government debt on markets may rise and fall by very significant amounts. But if a steep fall in the market price can never be the precursor of default, then Europe's governments and financial authorities are implying that any movement in the price of European sovereign debt is always based on a fallacy.

Now it's all very well to argue that markets are frequently wrong. There's plenty of evidence of market prices overshooting in boom years and undershooting in lean years. But it is something different altogether to say that when the price of Greek debt falls by a quarter, that can never betoken a possible default by the Greek government.

Even the IMF, run after all by a Frenchman, seems somewhat bemused by the extreme anti-market bias of the most powerful EU country, Germany.

In its latest assessment of euro area policies, it criticises the German government for failing to address the weaknesses of some of its banks. But more tellingly, it says that "Germany's unilateral ban on selected short selling does not appear well-founded in the absence of proven market abuse".

The IMF says the great variations in the price of insuring the debt of different eurozone members that we saw in the spring was "well explained by fundamentals, ie deficit and debt ratios and EMU membership (with a discount for peripheral countries and Italy) in most countries, including Germany".

In other words, the German allegation that these variations were the result of rapacious speculation - short selling of these insurance contracts in the form of credit default swaps - is a canard, according to the IMF.

All of which is a roundabout way of saying that there is a potentially fatal flaw in the European Union's rationale for conducting the stress tests of banks.

Far more likely is that they'll take one look at the results of those stress tests and conclude it's all a tawdry attempt to pull the wool over their eyes.

So the consequence of the stress tests - not immediately perhaps, but progressively as summer turns to autumn - may be to rattle and unsettle the institutions that provide vital finance to Europe's banks. And as I've noted before, the stress tests may ultimately lead to catastrophic real-life stresses on banks vital to the prosperity of Europe.