BP: Back from the brink

It is very difficult to describe a $17bn loss for three months of trading as a sparkling performance. 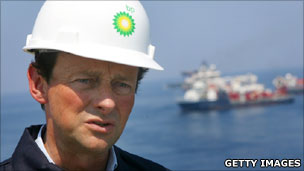 But for BP it could have been a lot worse - in that its estimate of the cost of the Gulf of Mexico oil spill of $32.2bn was less than some analysts have feared BP would end up paying for the clear up, compensation to those damaged and fines - and that's because BP believes that it will not be found guilty of gross negligence in relation to the disaster.

That said, in an interview with me, the chairman Carl-Henric Svanberg said there was no 100% certainty the final bill for the spill wouldn't be higher.

BP will pay for all this by selling assets worth $30bn - which Mr Svanberg insisted would not eat into the core of the business.

He also praised the long record at BP of the outgoing chief executive Tony Hayward, while saying that Mr Hayward was not the right man to lead the rebuilding of the business.

He defended the financial settlement with Mr Hayward - under which Mr Hayward will receive a one-off payment of over £1m and a £600,000 pension for life from the age of 55 - as no more Mr Hayward's contractual due.

Update 1045: Probably the most important statement made by BP today is that it doesn't believe that it has been "grossly negligent" in relation to the oil disaster in the Gulf of Mexico and under the terms of the US Clean Water Act.

As I've mentioned before, its confidence that its culpability is less than some have feared stems from its recent success in capping the well: because there have not been further fractures of the well as internal pressure has risen, BP has a defence against the charge that it cut corners in the design of the well.

Now according to my calculations, if gross negligence were proved, it would pay almost $20bn in penalties under the Clean Water Act (that's a penalty of $4300 per spilled barrel at an estimated daily flow rate of 50,000 barrels for around 90 days).

By contrast, if BP is right and it hasn't been grossly negligent, then the penalty drops to just under $5bn (because the penalty in those circumstances would be $1,100 per barrel).

Now BP's loss of $17bn is based on a provision for that lower penalty. So it's no exaggeration to say that BP's financial rehabilitation rides to no small extent on its ability to prove that its negligence was not of the gross kind.

All that said, it's worth noting that under accounting rules BP has been forced to calculate its liability for the oil spill costs on the basis that it bears all of them.

In practice, it may be able to recover 35% of much of the cost from the well partners, Anadarko and Mitsui.

But just to look on the dark side again, BP's $32.2bn pre-tax charge for the spill includes no allowance for any fines or penalties other than those under the Clean Water Act - and given the sheer number of government bodies that are investigating BP, it may not be safe to assume (as BP concedes) that there will be no other fines or penalties.