As I think we should all know by now, any borrower - a bank, a business, a government, you or me - faces two interconnected risks.

There's a solvency risk: the risk that we become incapable of honouring our debts in full, perhaps because we've borrowed too much in the first place or because we'll suffer some blow to our ability to generate income.

And then there's a liquidity risk, which is the risk that we run out of cash at a vital moment, often because our creditors lose confidence in our ability to pay our bills, and therefore stop lending to us just when we need their credit most.

Because liquidity or cash often dries up when lenders becoming fearful that we're on the brink of insolvency, and thus deprive us of further credit, solvency and liquidity are intimately related. 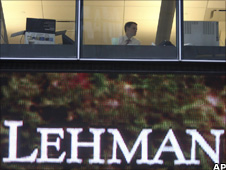 The great banking crisis of 2007 to 2008 was a story of solvency fears generating a liquidity freeze - which in turn bankrupted Lehman Bros and would have killed off Northern Rock, Royal Bank of Scotland, HBOS and other big banks around the world had they not been rescued by taxpayers.

Governments, taxpayers and central banks stepped in to provide vital funds to most western banks that markets were not providing, so the liquidity risk for banks dissipated - for a while at least.

As I've banged on about for some time, the scale of such state support for the banking sector was unprecedented and mind-boggling, equivalent to some 25% of global GDP at the peak, or £1,000 for every person on the planet.

But there is a circularity here: governments and central banks can only provide the liquidity required by the banking system for as long as they can borrow what they need from markets by selling government bills and bonds; so perceptions of countries' solvency matter not only to their own liquidity but also to their ability to guarantee the liquidity of the financial system. 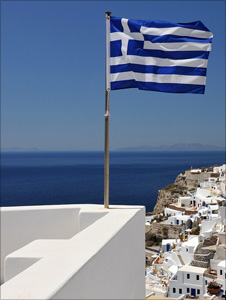 Which is why fears about the solvency of Greece and other overstretched eurozone countries have immediate knock-on effects on investors' and creditors' confidence in the credit-worthiness of banks that have lent to such countries and - even if only indirectly via the European Central Bank - have borrowed from such countries.

Thus the reasonable perception by US money-market funds that the risk of providing credit to eurozone banks has increased was in part responsible for the doubling in the interest rate at which banks were able to borrow dollars from other financial institutions, the BBA three-month dollar Libor rate.

But what of the liquidity risks faced by governments themselves, the risk that investors will stop providing the credit they need?

Well that's a function both of the gap between their revenues and their spending, which determines how much new money they have to borrow, and also how much of their existing debt is due for repayment in the next year or two.

For obvious reasons, investors' primary attention is focused on that gap between revenues and spending, the public-sector deficit, because insolvency is the inevitable consequence of a national debt that becomes too large to service.

This is not some theoretical, academic risk. A quarterly poll published today by Bloomberg of investors and analysts shows that 73% of them believe that Greece will default on its debts - in spite of the ambitious rescue package provided by other eurozone states and the IMF.

Now one of the reasons Greece has been so vulnerable is not just that it has been living beyond its perceived means, but also that in 2011 and 2012 huge amounts of its older debts come up for repayment.

In 2011 and 2012, it has to repay 63bn euros, equivalent to more than a quarter of its GDP. The only way to do that would be to sell new bonds to investors - impossible when creditors fear the country is going bust. 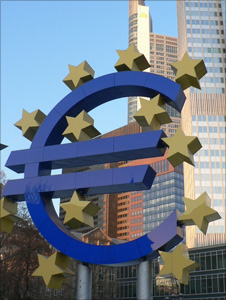 So the imminence of the repayment date of that 63bn euros of debt turned a Greek problem into a Greek crisis. The only solution was for the eurozone and the IMF to provide 110bn euros of credit to the Greeks that the markets would not supply.

In other words, the proximity of repayment dates on over-stretched countries' older debts matters enormously to judging the probability of whether those countries are able to reduce their deficits in an orderly way or whether there's likely to be a disorderly and painful crisis.

Or to put it another way, even if - like the UK - a country is viewed as borrowing far too much, it has a better chance of putting its financial house in order so long as a manageable amount of its older debts are not about to mature: the risk of a liquidity crisis is commensurately lower, the further out are the repayment dates on what it has already borrowed.

Which brings me, in my characteristically meandering way, to some fascinating data supplied to me by Moody's and Bloomberg (to which I am grateful).

These are statistics on how much existing debt has to be repaid in 2010, 2011, 2012 and 2013 by a series of countries perceived to have borrowed more than is prudent.

I have converted these raw numbers into a percentage of the respective states' GDPs, to allow comparability and to give a more meaningful sense of the refinancing challenge these states face.

Now, what may steady the nerves of some of you is that the UK faces comparatively modest debt repayments (as opposed to new borrowing) between 2011 and 2013: at the peak in 2012, it has to refinance bonds equivalent to 3.9% of GDP.

So the UK's total financing requirement over the next few years should not exceed 15% of GDP. It was considerably higher last year, in fact.

Which is not to say that the UK's public sector deficit, equivalent to 11% of GDP, is a trivial problem. But the government has perhaps a bit longer than would otherwise be the case to reduce that deficit because it has relatively less existing debt to refinance than some other countries.

Or to put it another way, because the UK's peak financing requirements is less than that faced by other countries, the UK is perhaps less at the mercy of markets than some may fear.

So what are these maximum financing requirements of countries regarded as overstretched?

Well, I've taken the annual average for a country's deficit over the period 2009 to 2011 (as per the IMF's figures) and then added the maximum repayment in a single year faced by that country.

What this should show is the vulnerability to investors losing their appetite to lend - and should also identify the year of greatest susceptibility to a liquidity crisis.

The results are perhaps not quite what you would expect.

Within the European Union, Greece (predictably) comes top of the list for annual financing requirement - with the need to raise 23.2% of GDP in 2012.

Second place however may surprise you: it's Belgium, with a 19.3% financing requirement this year.

Fourth: France, an 18.9 financing requirement per cent this year, because debt equivalent to 11.2% of GDP is due for repayment.

Fifth: Italy, with a refinancing requirement of 18.8% of GDP this year and not much less next year.

Germany looks pretty sound on this measure, with a peak financing requirement of 15.4% next year.

But here's what I thought was extraordinary. Ireland, despite its huge current deficit, has a peak financing requirement of 14.3%, because so little of its existing debt is coming up for repayment.

Broadly, these results support the conclusion that Portugal, Italy and Spain face the greatest financing challenge, because their current deficits are so substantial (the pure solvency risk is greatest for them).

But neither Belgium or France can be complacent about the need to maintain the confidence of creditors.

Also, perhaps to state the obvious, the next 18 months is the period of maximum risk of a eurozone funding meltdown.

Finally, a bit of global context is probably helpful.

As it happens, on my methodology, the peak financing requirement of the US, at 25% of GDP this year, is greater than even that of Greece.

But the US appears to be able to raise these colossal sums with ease, for the paradoxical reason that investors see it as a relatively safe haven at a time when they've become anxious about the eurozone.

That said, the US cannot borrow on this scale forever.

As for Japan, well its financing requirements defy belief, peaking at 50% of GDP this year and 34% next year.

But there is that crucial structural difference between Japan and Europe which allows the Japanese government to borrow these astonishing sums: Japanese individuals save far more than we do, and lend their money to the state.

It's moot whether Japanese savers will go on lending such massive amounts to their government forever. But right now the Japanese government can worry rather less than the British government does about how international investors and financial institutions view its credit.