The risks of forcing banks off welfare

There are always moments of anxiety when benefit claimants are weaned off their welfare support.

One such is today, as eurozone banks face up to the refusal of the European Central Bank to roll over €442bn of exceptional one-year loans provided to them by the central bank. 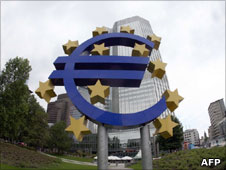 Eurozone banks are hooked on credit provided by - in effect - the public sector. And are fearful of having to fend for themselves.

To be clear, the ECB is not exactly throwing them on to the streets with its decision to demand repayment tomorrow of that €442bn: it is today offering banks as much three-month money as they want.

Which may seem bizarre, in that inevitably the ECB will tomorrow be repaid in part with funds it is providing today.

But central bankers take the view that the rehabilitation of banks requires that they become less dependent on longer term loans provided by the authorities.

See it as the equivalent of moving the long-term unemployed off disability payments and on to a jobseeker's allowance: it's a message to the banks that they have to start to prepare for life back in the real world, where all but their short-term unexpected liquidity needs must come from depositors, wholesale creditors and investors.

For Spanish banks - and also for Greek and Portuguese ones - that real world looks scary right now.

Spain's banks are finding it tough to tap commercial sources of wholesale finance, because of growing fears about potential losses stemming from the weakness of its property sector.

And more-or-less the whole eurozone banking sector - including big German and French banks - is under the dark shadow cast by their huge holdings of eurozone government bonds, because of deep-seated fears that Greece and perhaps other overstretched eurozone states will eventually default on their sizeable debts.

But it would be quite wrong to see the welfare dependency of banks as a purely eurozone phenomenon.

You'll recall that at the peak of the financial crisis in late 2008, public-sector support for the worlds' banks - in the form of loans, guarantees, insurance and investment - was equivalent to a quarter of everything the world produces, or more than $12trillion.
In the UK, support reached a maximum of around £1.3trillion, almost 100% of GDP.

These weren't just a few handouts. This was the biggest co-ordinated financial rescue operation the world had ever seen.

In the UK, for example, UK banks face a deadline of the end of 2012 to repay £165bn of high-quality liquid assets supplied to them by the Bank of England under the Special Liquidity Scheme.

And over the same timescale, British banks will have to find £120bn to pay back debt that has been guaranteed by the Treasury under the Credit Guarantee Scheme (there is an option to roll over a third of these government guarantees to 2014).

Now as bad luck would have it, this schedule for repaying the Bank of England and the Treasury coincides with a spike in repayments on other substantial debts of British banks, in the form of bonds and residential mortgage-backed securities.

What this means, according to the Bank of England, is that banks need to refinance or replace up to £800bn of term funding and liquid assets over the coming 30 months.

The Bank of England estimates that simply to replace this finance, British banks need to sell about £25bn of new bonds and asset-backed securities every month.

Here's the troubling news: what's required is 66% more debt issuance per month on average by banks than actually took place during the boom years of 2001-7. And banks are currently issuing (selling) less than half the debt that's needed.

Now if you think there's safety in numbers, you might be reassured that French, German and Italian banks also face substantial increases in debts falling due for repayment.

And wherever you look in the rich West, from the US to the eurozone, banks are currently borrowing substantially less on debt markets than they require simply to replace their maturing debts.

It has all the hallmarks of a second credit crunch.

Not a short sharp financial crisis in this case (although that can't be ruled out as a possibility), but a squeeze on the funding available to banks that - barring a miracle - will also squeeze the volume of credit they're able to make available to households and businesses, or to all of us.

As I said, coming off welfare is always painful. And as and when the banks feel pain, we're going to feel it too.

Update, 12:40: Eurozone banks have borrowed 131.9bn euros of three-month money from the ECB, which is about a third less than analysts were predicting.

It certainly implies that strains in the wholesale funding market are less acute than some feared, and that fewer banks than it was thought are being deprived of finance from commercial sources.

And with the market rate for bank-to-bank money on average 25 basis points - or 0.25% - cheaper than ECB money, it would be foolish to argue that eurozone banks are in tip-top condition: no bank would choose to borrow from the ECB, given the financial and reputational cost of doing so, unless it had to do so.