BP is having as much difficulty steadying its share price as it was having - until the last day or two - in stemming the flow of black stuff into the blue of the Gulf of Mexico. 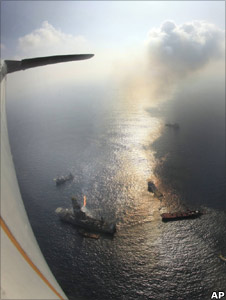 Having plummeted overnight on Wall Street, BP shares fell more than 10% in early trading in London - though they've since rallied a bit and are now down 6%.

That 10% fall wiped another £8bn off its market value - and meant that its shareholders were some 47% poorer since the explosion in April on the Deepwater Horizon rig.

By the way, if you're a Brit saving for a pension, you're probably, indirectly, a BP owner. So as Boris Johnson, the Mayor of London, implied this morning on the Today programme, you should probably be alarmed that President Obama has been knocking your company about the head.

What I find extraordinary is that BP's bonds, due for repayment in 2013, were trading yesterday at prices of less than 90 cents in the dollar. In other words, investors were regarding them as junk bonds, with a measurable risk of default.

That must be bonkers, surely?

And although there has already been considerable damage to the wealth of current and future British pensioners, the harm to the US economy may also be considerable.

I'm not sure how happy they'll be that every time the US president lays into BP, they find themselves a bit poorer.

And then there's the issue of the changed perceptions of the costs of drilling in the US basin. With the financial damage from the Deepwater Horizon debacle looking so vast and uncontainable, will investors in Exxon or Chevron or Shell be happy if they develop new deep-water wells, even if the moratorium on such drilling is lifted?

Arguably the ferocious attack by the US administration on BP shows that the risks aren't worth the rewards. Which could have serious and damaging ramifications for America's indigenous energy reserves.

To put it another way, these problems at BP aren't a little local difficulty for a sizeable company. They could have macro-economic consequences.

That said, as BP itself said in an emergency statement this morning, with the oil price at $74 or so per barrel, it is generating colossal amounts of cash over and above what it needs to cover overheads and invest.

So BP has the money to deal with the financial consequences of the leak, even the White House's latest bill - which is that BP should pay the wages of oil workers thrown out of work by other companies as a result of the suspension of deep-water drilling.

That said, if there were serious damage to the Florida coastline, and that in turn damaged its massive tourist industry, and if BP were held liable for those costs - well, then I suppose we might be into the territory of unbearable financial pressures.

But let's assume for now that the Florida Armageddon is a remote possibility.

On that basis, even if the eventual bill for the Gulf clear-up - including fines and compensation - reached well over £20bn (which this blog has been suggesting looks likely), those costs will accrue only over many years.

Or to put it another way, BP's board is in little doubt that - as of now and in a financial sense - it can afford annual dividend payments that were $10.5bn (or more than £7bn) last year.

But there is another way of looking at the affordability of the dividend - which is in respect of the cost of paying it in collateral damage to its important relationships with the White House and American legislators.

Overnight, the US Justice department said it was examining ways of forcing BP to suspend its dividend until BP's full liability for the oil spill is known with more precision.

And the Justice department is only doing what influential US politicians are demanding. Which is a serious concern to BP, in that it may be a British company by dint of history and legal domicile, but it is very American by virtue of its giant acquisitions of a decade or so ago.

My conversations with those at the top of BP indicate that they're increasingly minded to go for a voluntary moratorium on dividend payments, to bring some kind of fragile truce to hostilities with the US government.

But President Obama should be aware that such a suspension of dividends would in effect deprive US savers of some $4bn of income per annum. Or to put it another way, in a world of global capitalism, Obama can't punish BP and expect all or even most of the pain to be felt in Britain.