The ECB matters more than Clegg

For all the implications for the value of sterling and gilts of talks to form a British government, investors are this weekend probably more concerned about negotiations to stabilise the euro involving the European Central Bank (ECB) and European government heads - as Jim O'Neill of Goldman Sachs pointed out on the Today Programme. 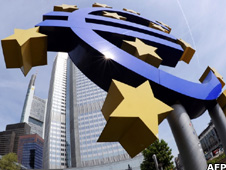 The big threat, not just to the health of the eurozone economy but to the world's prosperity, is that Continental banks are finding it harder and more expensive to borrow for longer periods on wholesale markers.

Bankers and economists see this strain in the financial system as horribly reminiscent of conditions prior to the meltdown of the global banking system 20 months ago.

"If the Europeans 'disappoint' tomorrow it's back to the autumn of 2008", is how an influential banker put it to me.

In simple terms, as you know, if banks can't borrow, they can't lend - which leads to cessation of vital flows of credit, bank collapses and recession.

What investors are looking for, at the least, is some mechanism to allow banks to borrow for a year or so against the collateral of their stocks of Portuguese, Spanish, Italian and other eurozone government bonds.

As an optimal outcome, many investors would want a eurozone version of quantitative easing, where the European Central Bank would buy eurozone government bonds for cash.

This last initiative would be particularly controversial, because it would see eurozone taxpayers indirectly taking on a liability to the financial health of individual eurozone states over which they have no democratic control (so German taxpayers would be exposed via the ECB to Portuguese government bonds and the credit-worthiness of the Portuguese government, for example).

Anyway, depending on whether a credible plan to limit the contagion from Greece's woes is announced tomorrow by the ECB and eurozone ministers, markets will open on Monday in a state of black despair or renewed optimism.

If the eurozone leaders - against most recent precedent - move swiftly to agree an ambitious, practical euro bailout package, the chances are that there'll be a boost to the value of riskier assets, especially shares.

The pound would also be a beneficiary, in that our record public-sector deficit means sterling is not viewed as risk free (for all the UK's AAA rating).

So what happens in Europe - rather than in smoker-free rooms of Tories and Lib Dems - will probably determine what happens to the British currency on Monday morning.

If European leaders are seen to organise a workable euro bailout, the pound would recover against the dollar. If they flunk it, well it may be a blackish Monday for shares, gilts and the pound.

As for the possible combination of eurozone political paralysis and no sign of a credible government being formed in the UK, well the market impact of that probably doesn't bear thinking about.