Obama gets his big bank reforms

Financial reform in the UK was always going to be conditioned by whatever reforms are enacted in the US. 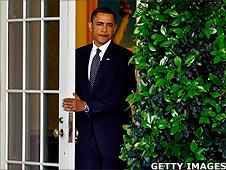 And as of last night, we now have a clearer - if not yet definitive - view of how Congress is planning to shake up Wall Street.

The important point is that the Senate has - finally - voted for financial reform. Which means that President Obama will get his way, and there will be an overhaul of America's biggest financial institutions more radical than anything we've seen since the 1930s.
But we can't yet be certain of the minutiae of the overhaul, because the Senate's reform package has yet to be reconciled with the House of Representatives.
Here, in general terms, is what is likely to happen:

(1) Most of the $600 trillion derivatives market will be forced through third-party clearing houses, to increase oversight of the deals and ensure participants in the deals put up sufficient margin or security against the risk of losses. As I've mentioned before, this will significantly reduce the profitability of derivatives trading for banks, because it will lessen their ability to blind gullible investors with the wizardry of their science.

(2) Banks may be banned from proprietary trading or speculating for their own account.

(3) An important part of banks' derivatives business, their swaps desks - which include the business of insuring loans through credit default swaps - may be walled off, or forcibly separated.

(5) There'll be new powers for the authorities to seize control of large systemically important institutions that appear to be running into difficulties.

(6) There'll be new powers for the authorities to break up troubled systemically important institutions in a supposedly orderly way.

(7) There'll be new multi-authority oversight of the risks in the financial system.

(8) In general, the Federal Reserve will emerge as the regulatory super-power, though the precise scope of its remit remains to be defined.
What does it all mean?

In theory, banks will be taking fewer risks - and they will certainly be less profitable.
There will be a particular challenge to the business model of Goldman Sachs, which generates more profit - in a proportionate sense - from proprietary trading and derivatives than most of its competitors.

The reforms would have direct implications for Barclays, owner of defunct Lehmans' US operations.

And there will be indirect implications for all big British banks, because where America leads in financial reform has a significant influence on the room for regulatory manoeuvre of the British government.

Finally, there is a knock-on to conditions in global financial markets, especially stock markets, in the coming weeks.

Investors will fear that US banks forced by Congress to retrench and narrow their scope will be less generous with the provision of credit and liquidity, which could dampen the economic recovery.

There's always a bill, a price, for necessary financial reform. Calibrating that price, in respect of timing and size, is the tricky part.