Lib Dem voice is loud on banks and tax

The Tories may have won the most votes and have secured the most MPs, but some in the City may well see the Tory-Lib Dem coalition as something of what they would call a reverse takeover by the Lib Dems. 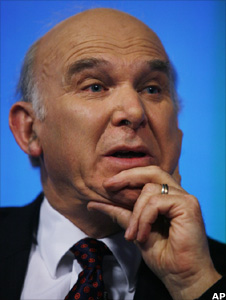 Because much of is emerging as the new government's policies towards the banks and on taxation bears the influence of Vince Cable, the Lib Dem's shadow chancellor.

There'll be an independent commission to look at whether the big so-called universal banks, such as Barclays and Royal Bank of Scotland, should be broken up, so that the more speculative investment banking activities would be formally hived off.

This is consistent with the Tories' manifesto position, but Mr Cable is more enthusiastic about breaking up the banks than Mr Osborne.

I suppose you could see the establishment of such a commission as an argument deferred for a year or so between the Mr Osborne and Mr Clegg on whether Barclays and RBS should be allowed to remain in their current colossal form.

Also there appears to have been a slight softening in the Tory commitment to dismantle the City watchdog, the Financial Services Authority.

The Bank of England will be given control of so-called macro-prudential regulation (the contentious question of whether credit should be rationed, as a dampener on potential booms and busts) and it will have "oversight" of micro-prudential, which is the monitoring of individual banks and financial institutions to ensure they're not taking excessive risks.

But the pact between the parties won't be explicit that the bods who do that micro-prudential regulation at the FSA will end up working for the Bank of England - which looks like a move in the regulatory direction preferred by the Lib Dems.

What may shock many investors is that the coalition will more-or-less adopt the Lib Dem's policy on raising the capital gains tax rate to streamline it with income tax. That means the top rate of CGT will be at least 40%, and possibly 50%.

However a much lower rate will be applied to "entrepreneurial" business investment: the higher capital gains tax rate is aimed at extracting more revenue from speculation, but there will in a sense be a return to the system only abandoned by Labour a couple of years ago, where there were significant tax rewards for those who invest in wealth-creating activities for longer.

As I mentioned yesterday (see What a Tory/Lib Dem government would do), the tax priority would be to raise the income tax threshold in the course of the parliament to £10,000, to the benefit primarily of those on lowest pay.

And, as Stephanie said, there'll be a tweaking of the Tory pledge to reverse Labour's National Insurance rise, so that the reversal applies only to the NI paid by business, rather than by individuals.

Meanwhile, as I pointed out, the Tory manifesto promise to increase the inheritance tax threshold to £1m would be kicked into the long grass.

For most investors there will be relief that there will be no pulling back from the Tories' plans to cut the UK's record public sector deficit a bit more and a bit earlier than Labour or the Lib Dems would have done.

So I would expect sterling and the price of government bonds to rise this morning. But with the stamp of Mr Cable on much of the approach to banks and regulation, I think we may see a bit of weakness in banks' share prices.

Update, 08:42: An encouraging sign for the new government is that the rise in the price of government bonds that we saw late yesterday has continued this morning. Nothing dramatic - but it shows that investors have some confidence in the ability of the coalition to make in-roads into the record public-sector deficit.

The gap between the yield on equivalent German and UK government bonds has narrowed, which shows that investors believe the risk of lending to the British government has reduced.

Sterling has lost some of the gains it made against the dollar last night. And share prices have fallen a bit, though nothing too scary.

Update, 10:25: George Osborne and the Treasury will retain formal responsibility for overseeing banks and financial regulation.

However a new ministerial committee will be set up to devise banking policy, which will include Vince Cable as one of its members.

The committee will be chaired by Osborne as chancellor.

It looks as though Cable will be the secretary of state for business.

So what'll happen to Ken Clarke, who did that job in opposition for the Tories?

Update 10:35: BA, Virgin and the airlines may be in for a bit of a shock, because the Lib Dem policy of taxing planes rather than passengers has been adopted, as one of the coalition's green policies.

As I've mentioned, the Lib Dems have agreed to the Tory proposal for an accelerated programme to cut the so-called structural deficit in the public finances, with a £6bn down payment this year.

However the Lib Dems won a concession that part of that £6bn will be deployed for job creation.

A commitment to a new tax or levy on banks is part of their joint programme.

And a significant move towards a £10,000 income tax allowance will be made in the first Budget, due in 50 days.

Update 10:55: One of the most difficult areas of negotiation between the Lib Dems and the Tories was on nuclear power, where the Lib Dems take the view that new nuclear power should not receive a public subsidy of any sort and where they believe that there may be more efficient green generating alternatives for meeting CO2 reduction targets.

In the end, as I understand, nuclear power is one of those areas where the two have agreed to disagree. Which creates considerable uncertainty for the two big companies, EDF and Centrica, that are hoping to role out a series of enormous new nuclear stations.

And they may be alarmed that the person who'll be in charge of whether the new nuclear plant is built, as secretary of state for the environment, will be a leading Lib Dem, Chris Huhne.

Update, 16:53: I understand a leading business figure is likely to be made a peer in order to join the government, in the kind of role that was occupied by the former chairman of Standard Chartered, Mervyn Davies - with on foot in the Business Department and another in the Cabinet Office.

The obvious candidate is Simon Wolfson, chief executive of Next and close chum of Osborne and Cameron. But he's told pals and investors he has no intention of giving up the day job.