Rating agencies: Who made them so powerful?

Is there any more powerful and feared institution in Europe (or the world) than Standard & Poors? 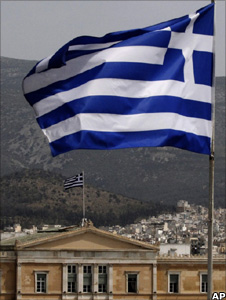 This firm - whose ostensibly blameless activity is to assess the quality of credit that's traded on financial markets - has induced high anxiety in European Union governments and citizens by giving lower grades to the public sector debt of Greece, Portugal and Spain.

Loans to the Greek government have been categorised by S&P as junk, or carrying a high risk of default - whereas those who lend to Portugal and Spain have been told that their money is a little less secure than it was, with Spain having a significant quality edge over Portugal.

S&P's assessment of the growth prospects of these three nations, and their respective prospects for closing the ominous gaps between what their respective governments spend and what they raise in taxes, has induced gyrations in markets: the euro and share prices have fallen; the price of each of the three nation's government bonds has dropped, with those of Greece plunging, such that the implied cost of lending to Greece is now higher than that of much poorer, less democratic countries.

And there has been a frenzy of panicky meetings involving the International Monetary Fund, the German government, senior European Union officials and so on, to stitch up some kind of rescue deal for Greece, which may eventually involve eurozone states and the IMF extending more than £80bn of emergency credit to Greece.

Crikey. That S&P certainly knows how to make a noise.

Now, of course, S&P isn't responsible for the widening deficits of Greece, Portugal and Spain that represent the fundamental reason why confidence in those nations' creditworthiness - and in the value of the euro - has eroded.

S&P would claim to be an articulate messenger, an impartial analyst of the woes they face, not in any sense the creator of all this mayhem.

But it is nonetheless extraordinary that some relatively simple economic research by a private-sector organisation can have quite such an impact.

All the facts underlying that research are well-known and easy to obtain. All that S&P has done is to say that Greek debt is junk; but surely Greek debt can't in reality be junkier today than it was last week just because S&P says so?

The answer is that S&P - and the two other leading credit-rating agencies, Moody's and Fitch - have been endowed with enormous authority by governments, central banks and regulators.

They are the gods of the credit markets, and made so by fiat of the Bank of England, the European Central Bank, the US Securities and Exchange Commission and so on.

The rating agencies' assessment of the quality of bonds or tradeable debt issued by public sector and private sector is, officially, the last word on the subject - and has been since the early 1970s, when the SEC in the US started using their ratings to assess the strength of securities firms' balance sheets.

So, for example, the Bank of England typically provides credit to commercial banks if those banks provide bonds as collateral to it that are classified as AAA by rating agencies. The ECB operates a lower quality threshold for the provision of funds or liquidity to banks, but still uses the rating agencies as arbiters of the relevant security or collateral quality.

Which in turn conditions the investment decisions of banks, insurance companies and pension funds: if a bond loses its AAA status, the potential size of the market for that bond shrinks, at a stroke.

By now I would hazard that a few of you will be shouting at the screen that these are surely the same rating agencies which gave AAA ratings to many tens of billions of dollars of tranches of collateralised debt obligations and issues of residential mortgage backed securities that turned out to be a very bad joke.

These AAA CDOs weren't the solid gold that the AAA badge implied: they were manure (although arguably lacking the functional benefits of good manure).

Many would say that S&P and the others played an important dishonourable role in fomenting the worst banking crisis since the 1930s. So how is it that S&P's word on the quality of Greek debt, Portuguese debt and Spanish debt carries any credibility at all?

What is extraordinary is that almost nothing has been done by governments, or central banks or regulators to break the de facto monopoly of S&P, Moodys and Fitch in the business of rating bonds.

There has been a good deal of talk about reforming the way they are remunerated, to end the apparent conflict of interest arising from the convention that they are paid by borrowers (who obviously want the highest possible rating for their credit).

But isn't the real issue that the ratings troika doesn't face any proper competition, thanks to the official endorsement the firms receive from central banks and regulators?

Wouldn't it make sense for the Bank of England, the European Central Bank, the FSA, the SEC and so on to find other ways to judge the quality of the bonds that underpin their evaluations of banks' financial robustness.

Perhaps I am being over-squeamish, but it doesn't feel democratic or sustainable that the fiscal fate of nations and currency zones - and indeed the perceived strength of the financial system - rests on the analytical verdict of three private-sector research firms, the financial record of which has in recent years not been unblemished.