Lloyds: Black is the colour of spring 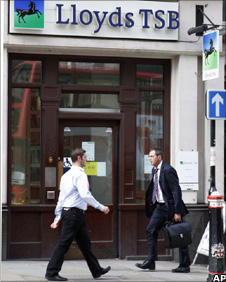 So many will see it as firm evidence of better times that Lloyds says it was in profit during the first three months of the year - and expects to be in profit for the remainder of 2010 too.

This represents a remarkable turnaround - from losses of more than £6bn in 2008 and in 2009 for the two banks, Lloyds TSB and HBOS, which came together in a controversial marriage to form the Lloyds Banking Group we know today.

And it's a better performance than Lloyds expected even a month ago, when it predicted that for the whole of the current year it would return to the black.

There have been two significant contributors to the recovery - a sharp fall in the losses on loans going bad, and a pronounced widening in the gap between what Lloyds charges for loans and what it pays depositors. Which may stoke complaints that banks are paying too little to savers and charging too much to borrowers.

There is also growing evidence that taxpayers will emerge with a profit, perhaps a significant one, on the emergency investment the state pumped into Lloyds and Royal Bank of Scotland, to prevent them collapsing.

At their current share prices, taxpayers are a few billion pounds up on the £66bn we paid in aggregate for our stakes in those two banks (on this morning's share price, Lloyds remains a smidgeon below the 73.6p we paid for our 41% stake, and RBS shares are well clear of taxpayers' 50.2p average purchase price).

That's not to say that everything in Lloyds' garden is spring-like and rosy.

The bank still faces a formidable challenge to reduce its dependence on loans and guarantees provided by British and overseas taxpayers, that totalled some £157bn last year.

And some will fear that Lloyds and other banks are not yet providing the credit to viable borrowers that a growing economy requires - as indicated by Lloyds remarks that its lending balances remain flat.

But back to that question of whether and when we might pocket a real, cash profit on our holdings in Lloyds and Royal Bank of Scotland. Here are a couple of points to consider.

This would allow the government - in theory - to borrow a few tens of billions of pounds relatively cheaply, at a time (no secret here) when it has quite a large borrowing appetite.

Second, even if we do emerge with a profit on the rescues of Lloyds and Royal Bank of Scotland, no one - I assume - would believe that represents adequate compensation for the role played by banks in causing the worst recession since the 1930s (which in turn is causing the worst crisis of confidence in sovereign borrowers for several decades too).