Independent: It is, are the new owners?

Something remarkable may well happen on Wednesday or Thursday, which is the announcement that a former KGB officer worth $2bn (according to Forbes) is buying a pillar of Britain's free press, the Independent. 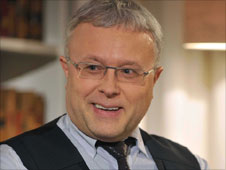 Actually to say that Alexander Lebedev and his son Evgeny are buying the Indy doesn't quite convey what's happening.

Ownership of the paper (launched in 1986 under the slogan "It is, are you?") and its £10m-per-year losses would transfer to them, but naturally they would not actually have to hand over any cash to take on this expensive responsibility.

The deal has been expected for weeks; on-off negotiations have been going on for well over a year. And those close to the Lebedevs say they hope to unveil their plans tomorrow or the day after.

That said, it wouldn't be a great surprise if there was another delay. Last week agreement was held up over what Trinity Mirror might demand if a Lebedev-owned Indy decided to remove distribution from the Mirror publisher.

My strong sense is that momentum to complete the deal is now unstoppable - although, to resort to cliché, no deal is done till it's done.

So if the Indy completes its almost 25-year metamorphosis from a bold initiative by journalists to control their own destiny into just another's plutocrat's bijou, what does that portend?

Well, as I said in an earlier note, in mundane commercial terms it could mean that there will be no charge for some or all of the Indy's circulation: the Lebedevs already give away the Evening Standard in London, and are pleased with how that has increased the reach of the paper and has helped to push up advertising revenues.

However, abolishing the cover price would not be cheap for them: the Indy's current annual revenue from circulation is about £30m, which is a lot of money to sacrifice on a hunch that over time advertising income will rise enough to compensate.

That said, the Lebedevs will not buy the Indy and be content that it remains the smallest of the so-called quality papers.

They will want to put oomph behind circulation.

Nor are they taking a conventional view of who should run the Indy. They've approached Greg Dyke, the former director general of a rather bigger organisation, the BBC, to be the new editor: he hasn't said no (although that doesn't mean he'll ultimately say yes).

So the scale of the Lebedevs' ambition is unsettling other newspaper proprietors and managers.

The Russians will be braced for fearless investigative journalism from competitor titles, examining the origins of their fortune, whether their purse really is bottomless, whether Alexander Lebedev's relationship with another famous former intelligence officer, Vladimir Putin, is as fractious as it seems (fractious would be good, according to the conventional view) and whether they are committed to free expression.

Having met them, they talk an impressive talk about their access to cash and their passionate commitment to an independent press.

But I haven't conducted banker-style due diligence on them.

Whether such due diligence is strictly necessary, given that the choice for the Indy is probably their underwriting or a lingering death, is moot.