Here's a possible plot for episode 7 of an epic in the style of Star Wars.

The ageing democratic western Federation, weakened by decadent excessive consumption on borrowed money, sells crown-jewel assets to a reviving eastern super-power - which imperiously demonstrates where the power in the galaxy lies by arresting and imprisoning a quartet of Federation representatives on charges of corruption.

If it sounds a tad familiar, it may be because you've been reading the business wires this morning.

Overnight we had formal confirmation that Ford Motor is selling the totemic Swedish car manufacturer, Volvo - intellectual property and all - to Geely of China for £1.2bn.

And this morning a Shanghai Court ruled that four employees of the Anglo-Australian mining giant, Rio Tinto, were guilty of taking bribes and obtaining commercial secrets. One Australian Rio staff-member and three Chinese nationals were sentenced to prison, for stretches ranging from seven to 14 years.

What do these incidents show? Well I've said before (and you'll know anyway) they are redolent of the most significant shift in power - from west to east, and more particularly from the US to China - that has been seen since the demise of the former Soviet Union two decades ago left America as a lonely economic and political titan.

Some will say that the Rio Four are being punished for little worse than doing their jobs.

Rio has today stated that's not the case. The legal process in China may not be wholly transparent, but Rio is persuaded that that the four breached its code of conduct by taking bribes and it has therefore dismissed them.

They're on their own, and won't be supported by Rio if they appeal their sentences.

Does it need pointing out that China is Rio's most important market by a country mile?

What about the industrial espionage charges? Well here is what Rio says about those:

"Rio Tinto is unable to comment on the charge regarding obtaining commercial secrets as it has not had the opportunity to consider the evidence. That part of the trial was held in closed court and no details of the case were made public until the verdicts and sentences were announced today."

Experts on Chinese law say the real problem here for Rio and for other companies with significant ambitions to win business in China is that what counts as an industrial secret in China would be considered unremarkable market intelligence in the UK or US.

Which takes us to the nub of the matter.

Indebted, overstretched companies like Ford are attempting to rehabilitate themselves by selling assets to the likes of China.

And almost any mainstream politician will tell you that if we're going to escape our economic malaise here in the UK and the US, we have to sell more to the Chinese and rely less on credit indirectly provided to us by China: we have to export more, consume less and reduce our indebtedness. 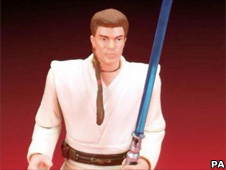 But China has made it absolutely clear that if we want to play on their manor, we play by their rules. And these are not rules that are necessarily consistent with western ideals of fair play and free trade (although for the avoidance of doubt, I'm not remotely suggesting that it's a fundamental western freedom to pay or receive bribes).

So just where is Obi Wan when you need him?