The pathology of banking crises and sovereign debt crises are very different.

They may stem from a similar fundamental cause: excessive debt or leverage. 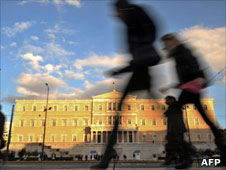 But banks go kaput overnight, while countries go bust in a malaise that tends to be long and drawn out.

So although the erosion of investors' confidence in the ability of Greece to pay its debts may turn out to be as significant as the collapse of Lehman Brothers in the autumn of 2008 or the wholesale run on the likes of HBOS and Royal Bank of Scotland, they are very different phenomena.

The most important distinction is that once confidence in a bank has been lost, that's it - fat lady sings, curtains, goodnight.

Well all banks suffer from the endemic vulnerability that they borrow short and lend long. So if too many of a bank's creditors and depositors want their money back at the same time, that's a disaster - because most of creditors' money will have been lent out to the likes of homeowners or companies, which don't have to pay it back for years.

By contrast, if you happen to have lent money to the Greek government by buying a Greek government bond, you have no right to demand your money back until the redemption date on the bond (although you should be able to sell the bond to another investor).

So the moments of painful truth for governments perceived to be in financial crisis are those contractual dates when the debts they've incurred years ago have to be repaid.

According to Laurence Mutkin at Morgan Stanley, the "pressure point" for Greece will be April and May, when 20bn euros of debt and interest falls due.

In particular, one bond of 8.22bn euros has to be redeemed on 20 April.

And another one of 8.1bn euros is supposed to be repaid on 19 May.

Looking at projections of Greece's tax revenues, expenditures and cash in its central bank, it will struggle to find the 20bn euros.

However all is not lost.

In normal circumstances it would simply borrow a further 20bn euros from investors to pay off the old debt - although to state the obvious, circumstances are anything but normal.

The significant issue - which seems to have been lost in politicians' rhetoric - is that Greece faces two distinct (though related) problems.

The first is a liquidity challenge. Can it find 20bn euros to get through April and May?

If it can, then it may well be able to finance itself through the rest of 2010, since there are no other big spikes in debt payments for the rest of the year.

And, by the way, on this analysis, Ireland looks in very good shape for 2010, says Morgan Stanley, in spite of its big deficit and debt - because it has more than enough cash to cover forthcoming debt redemptions.

By contrast, the borrowing and repayment profiles for Spain, Portugal and the UK are rather more like Greece's - with some substantial financing challenges ahead.

All that said, it seems pretty clear that if the eurozone's members were prepared to underwrite Greece's 20bn euros of imminent refinancing need, that would buy the Greek's a good deal of time to sort its second challenge - how to remain solvent by cutting its public expenditure so that it comes into balance with revenues.

That is a task for heroes: it requires persuading Greek citizens to accept cuts in public services and living standards for a prolonged period.

Meanwhile the world's regulators might perhaps rebalance risk and reward a bit more in the direction of the Greek people and away from banks, hedge funds and assorted financial speculators by revisiting whether naked trading in credit default swaps should be permitted.

This morning's FT contains a searing indictment of the powerful financial motives to destabilise Greece - or Portugal, or Spain, or the UK - of those who would profit if it were to default, thanks to the bets they've made on default in the CDS market.

The author may be seen as an intriguing authority: he is James Rickards the former general counsel of Long-Term Capital Management.

For those with short memories, LTCM was once the world's biggest hedge fund, whose insane leverage and indebtedness took the global financial system to the edge of the precipice.

What's that cliche about the joy at one sinner's repentance?