This week's epistle to fans from Arsene Wenger muses on whether Manchester Utd will derive advantage from being knocked out of the FA Cup by Leeds Utd. 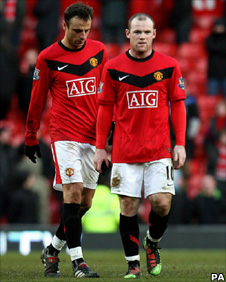 The always counter-intuitive Arsenal supremo points out that FA Cup matches tend to be hard on the heels of Champions League games - which implies that Man Utd's players will be fresher for the matches that really matter.

Bankers however take a different view of Man U's humiliation by a team two divisions below.

They point out that debt-laden Man U needs posteriors on seats in as many games as possible to service the interest charge - and that the 3rd round exit from the cup deprives the club of important revenue.

One banker with a close knowledge of the club put it like this to me: Manchester Utd as a business is a delicately balanced financial machine, which works when the team is winning and revenues are pouring in, but where there is not much of a financial cushion to absorb the inevitable occasional flop.

He said that the huge debt that was taken on when the Glazer family bought the club was predicated on the basis that Man Utd would have decent runs in the Champions League and FA Cup in most years - which of course is typically what has happened.

The important numbers are these, as of 30 June 2008, the date of the last published accounts for Man Utd's holding company, Red Football Joint Venture Ltd.

And it had £175.5m of so-called payment-in-kind notes, where the interest is rolled up into the principal rather than paid in cash. The interest rate on these is 14.25%.

So the total annual interest bill was just under £70m (including rolled-up interest).

That compares with a net cash inflow from operating activities (largely profit before interest and taxation) of £88m.

So in that year, if Man Utd did not want to increase its overall level of debt, it had less than £20m to spend on players and other investments.

Now Man Utd fans would presumably say that was money well spent, since the club won the Premier League for the umpteenth time last year.

But the big question is whether the current level of indebtedness is excessive for this point in both the footballing cycle and in the economic cycle.

To state the obvious, post-Ronaldo Man Utd does not look as invincible as last year's team. And a weak British economy deprives all clubs of incremental revenues.

Which is why Man Utd is looking at ways to reinforce itself in a financial sense.

As has been widely reported, Man Utd is considering taking on new debt to pay off some of the old debt.

According to bankers, it would like to raise around £600m through a bond issue.

But here's the funny thing. The interest on the much bigger bank loan of £519m is very competitive. It ranges between 2.125% and 5% over Libor. So right now it should be paying no more than 5.5% - which is cheap money.

It does not seem to make sense to pay off that low-interest debt with the proceeds of a bond paying a higher interest rate.

But that's to ignore the problem that the burden of the PIK is growing exponentially, because the 14.25% interest rate applies to the original principal plus the rolled up interest.

The other important point is that Man Utd's banks are the so-called senior creditors and have first claim on any money deployed to repay loans, so they would probably not allow the PIKs to be redeemed unless some or all of their loans were also repaid.

So there is a logic to a comprehensive refinancing via a bond issue.

This is a long-winded way of saying that the UK's most formidable football team is not without its financial issues.

Which is also to say that the relative immunity of top-flight football from the impact of credit crunch and recession has been delayed, not avoided.

The simplest way for Man Utd to alleviate the immediate financial pressure would be to spend very little in the January transfer window.

And it certainly would not be the only club to sit on its hands rather than buy new players.

With clubs like Portsmouth and Crystal Palace in serious difficulties, right now there are arguably more forced sellers of players than buyers with deep pockets.

Man City may have a bottomless purse. But the noises from Chelsea suggest even it isn't likely to spend like it once did.

Perhaps this is the moment when the transfer market will crack and player prices fall significantly.

Which - of course - would further weaken the finances of clubs where the value of players represents a significant proportion of balance-sheet assets.