For financial markets, the pre-Budget report has been something of a non-event.

Sterling is a little weaker today, as are the prices of UK government bonds. 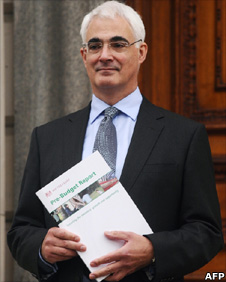 There's no great surprise there: we've known for months that Britain's public finances are a horror story, and what the chancellor said today neither added or subtracted gore to any great extent.

Or to put it another way, the UK is neither closer or further from losing its AAA credit rating, or suffering a sterling crisis, or being unable to borrow from international investors - or any of the other possible nightmarish next chapters in this epic of Western economies that have borrowed too much.

If business in general is likely to feel a bit let down it is that National Insurance is rising to support increased spending on schools and hospitals rather than to shrink the deficit.

The point is that most in the private sector would like to see the size of the state shrink as a share of GDP from the current high peace-time levels, along with public-sector borrowing, to help create the economic space for the private sector to grow.

As for the new levy on banks that pay bonuses of greater than £25,000, the Treasury estimates that it will affect 20,000 UK-based bankers.

That's a lot of bankers.

The Treasury is calling it a "bank payroll tax" - and says that the 50% tax on bonus pools will not be deductible when banks compute their profits for taxable purposes.

So they'll have to pay their mainstream corporation tax and their new payroll tax.

The tax comes into force tonight and will apply until 5 April 2010.

Interestingly, if banks were to defer bonus payments till 6 April, the exchequer would still receive a lot of extra revenue - because that's when the top rate of income tax rises from 40% to 50%.

So if banks are planning to pay out £6bn in aggregate in bonuses for their performance in 2009, which they are rumoured to be doing, and they were to defer all payment till the new tax year, individual bankers would have to shell out an extra £600m in tax (presumably the Treasury believes that bonuses will be much less than £6bn in practice given that it thinks the 50% payroll tax will raise little more than £500m).

In other words, those banks that are desperate to pay big bonuses have some discretion over whether they pay the extra tax or whether their employees do so.

As one fund manager said to me today, "the Treasury is being bloody clever".

Actually, the Treasury has also made it clear that it may extend the liability period for the temporary payroll tax from 5 April, if other curbs that it plans on banks' remuneration practices are not by then implemented.

Here's one final thought, courtesy of that money manager I mentioned earlier.

He thinks that the payroll tax could be good for the economy, because it will encourage banks to build up their capital rather than pay bonuses, which in turn will encourage them to lend and invest a great deal more, to increase their profitability.

Maybe this is wishful thinking on his part.

But he thinks the tax could encourage banks to play a bigger role in sustaining an economic recovery - because only in doing so will they be able to generate the substantial revenues that will allow them before too long to pay those fabulous bonuses again.