RBS board to quit if chancellor vetoes £1.5bn in bonuses

The directors of Royal Bank of Scotland have been given legal advice that they would have to resign if the chancellor of the exchequer were to block them from paying the bonuses they regard as essential to maintain the competitiveness of the group. 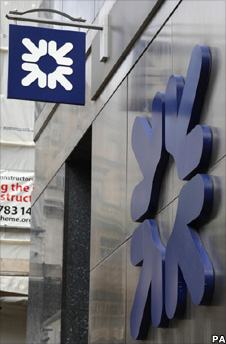 I have learned that they sought this legal advice after the Chancellor, Alistair Darling, insisted last month that the Treasury will have the "right to consent" to how much Royal Bank pays in bonuses and how it pays those bonuses.

Or to put it another way, the chancellor - as represented by UK Financial Investments, the investment arm of the Treasury - has insisted on a right of veto over bonuses to be paid by Royal Bank.

The scene is therefore set for brinkmanship of a potentially devastating sort for both Royal Bank and the government.

The stakes are so high because of the sheer amount that Royal Bank - currently 70% owned by taxpayers - feels it needs to pay in bonuses to maintain the competitiveness of its investment bank.

I have also learned that Royal Bank has informed Mr Darling that - on the basis of the profits it has generated so far this year - it would expect to pay bonuses 50% greater than last year.

Including bonuses it would want to pay to retail bankers and to employees in the rest of the group, it would intend to pay £2bn in bonuses for its performance in 2009.

Such payments will be hugely contentious, given that Royal Bank of Scotland is only alive as a group thanks to hundreds of billions of pounds of loans, guarantees, insurance and investment provided to it by taxpayers.

However, Royal Bank's directors believe that if they don't pay the "going rate" for bonuses, its top bankers will desert to rivals - thereby destroying a vital part of the business.

In the current year's exceptional conditions, Royal Bank's investment bank has generated some £6bn of profit.

The board believes that up to half the intrinsic value of the bank is in its investment bank. So if the chancellor were to veto bonuses which the directors believe to be essential to preserving that value, they would be under a legal obligation to quit - because they would be prevented from taking actions they perceive to be in the interests of shareholders.

It is understood that Royal Bank's chairman, Sir Philip Hampton, argued to the chancellor that he was playing with fire by insisting on the final say over bonuses.

Mr Darling now has the appalling choice of either approving bonuses that will be described as grotesquely unfair by opposition parties and by many voters, or of sparking a crisis at RBS by prompting the mass resignation of directors.

Mr Darling insisted on the explicit veto over bonuses as a condition of providing £25.5bn of new capital to Royal Bank and insuring £282bn of its loans and investments against losses under the Asset Protection Scheme.

The final decision on bonuses in 2009 will be taken in February.

As a bank, the entire RBS board cannot in practice all quit at the same time. The Financial Services Authority would not allow the bank to be rudderless. But the directors would be able to announce a collective intention to quit, so that replacements could be found in an orderly fashion.