Osborne and a corporate tax revolution

George Osborne has said it twice now in major speeches, so I think the City has to take the threat seriously: a Conservative government is likely to make it much more expensive for companies to finance their activities by borrowing vast amounts rather than through equity funding. 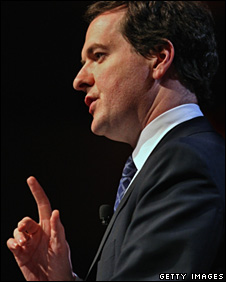 In his address yesterday to the Association of British Insurers, the shadow chancellor said he wanted companies to reduce their "reliance on debt and leverage to increase returns" - and that he would do this by "reducing the bias in our corporate tax system against equity and towards debt financing" (for an acute and amusing insight into the rest of what he said, see Stephanie Flanders' note of yesterday).

Plainly one route would be to provide additional forms of relief for equity investment or to abolish stamp duty on share trading (which Osborne has in fact long favoured).

But tax revenues are bound to remain tight for some time to come, so it is difficult to see Osborne as a new chancellor (should that be his fate) choosing to reduce revenues for the Exchequer - especially since he would be seen to be rewarding capitalists, while almost certainly squeezing public services at the same time.

Much more likely, as he said in a little-noticed speech in March, is that he would reduce the amount of interest payments that companies can claim as an allowable cost to reduce their tax bills.

Here's what he said in the spring: "the UK is widely regarded as having the most generous tax treatment of debt interest of any major economy", so it was "time to look again at the generosity of interest deductibility in our corporate tax system".

He acknowledged this wouldn't be easy, in a technical sense. And there would have to be serious and diligent consultation on the detail.

But here's a striking insight into his instincts: "one of the most damaging impacts of the credit boom" he said "was that real venture capital in exciting new businesses was squeezed out by highly leveraged private equity".

In other words, Osborne - unlike either Alistair Darling or Gordon Brown - has signalled strong distaste for the private-equity boom of 2005-7, when many of our biggest companies were taken private in deals that saw them loaded up with debt (if you go back to the archives of this blog for the first half of 2007, you'll find a good deal about all this).

Right now, many private equity firms are in a spot of bother: some of the over-borrowed companies they own are floundering under the weight of their debts; as credit bubble has turned to crunch, they're not finding it easy to finance new deals.

If private-equity firms expected life to be any easier for them under a Tory government, well Osborne has made it clear they can expect no favours from him. His mooted tax reforms would undermine their business model, which relies to a great extent on the tax-deductibility of interest on the borrowings they take out to buy businesses.

That said it would not be "ouch" for the entire private sector. Which is pretty fortunate, since demand for goods and services may remain fairly fragile after the next election.

Osborne has an aspiration to reduce the headline rate of corporation tax to a significant extent - which is a laughable ambition given the frightening weakness of the public sector's balance sheet.

But if he were to reduce the tax breaks on corporate debt, just possibly slashing corporation tax would be more than the idle daydream of a wannabe Tory chancellor.