Executive rewards, for what? 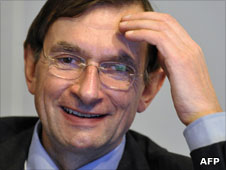 The chief executive of Shell has said - according to a report in today's Financial Times - that the way he performed for his colossal oil company was neither improved or worsened by the substantial sums of money he is paid.

It rather begs the question why it made sense for Shell's remuneration committee to put in place all sorts of reward schemes whose effect was to increase his total compensation last year by more than 50%, from €6.5m to €10.3m (or, in Shell's own translation, form £4.5m to £8.2m).

And, by the way, Mr van der Veer isn't particularly highly paid for a boss of a big British or big multinational company.

Now he's about to retire from Shell, so some might note that he doesn't have a great deal to lose from speaking as he finds.

Also he is presumably a bit shaken by the humiliation recently suffered by Shell, when its shareholders reacted with fury after learning that senior executives - including Mr van der Veer - had received substantial rewards under an incentive scheme even though Shell had missed the relevant target.

In a non-binding vote, a majority of investors manifested their displeasure by voting against Shell's remuneration practices (and see my note, "Executive gravy train stalls").

As it happens, Mr van der Veer hasn't returned the £1.2m that most shareholders feel he didn't properly earn. And some of them may be a touch bemused that he appears now to have conceded he didn't actually need several million other pounds that he received.

But he has shone a light in the right place.

As I recently pointed out (see "Bosses' pay and WPP"), the average remuneration of FTSE 100 chief executives has risen 295% over the past decade, compared with a 44% rise in the typical pay of a British employee.

And if you needed evidence, the average value of FTSE 100 companies - which is supposed to capture the effects of management genius over the longer term - fell 23% over those 10 years.

In other words, the owners of FTSE 100 companies - that's millions of us through our pension funds and savings schemes - have not been paying for performance.

We've been rewarding these chaps (and they are mostly chaps) for value destruction on a colossal scale.

Doubtless Shell's remuneration committee would insist that Mr van der Veer and his colleagues have to be paid these sums, so that Shell and other businesses can attract the best talent on the putatively international jobs market.

But perhaps it's time for remuneration committees to question whether that jobs market provides relevant benchmarks.

Mr van der Veer implies that the international market for executive talent is ludicrously irrational and inefficient, since by his own admission it puts a price on him that is considerably more than is necessary to get the best out of him.

George Osborne has fired a shot across the bows of the big banks about how they reward their top executives.

In a speech to the Association of British Insurers this morning, the shadow chancellor said:

"Some banks are now making big profits again from higher margins, underpinned by taxpayer guarantees. It would be a huge mistake if they pay out huge bonuses this year-end on the back of these government-supported profits.

"The City should remember that the inter-bank guarantees, the liquidity operations, the insurance schemes and the large equity stakes exist to protect the wider economy.

"The banks should be using their profits to rebuild their balance sheets, not to hand out huge bonuses while the rest of the economy picks up the pieces for the follies of finance."

Note that this is a warning to all the big banks and not just Royal Bank of Scotland, Lloyds and Northern Rock, or those banks in which taxpayers have a big stake.

Osborne is pointing out that all our substantial banks have been kept alive by unprecedented financial support from taxpayers in the form of loans and guarantees.

And he is insisting that none of them should pay big bonuses until they have weaned themselves off their dependence on taxpayers in this broad sense.

This may infuriate those who run our biggest banks, because there's evidence from Wall Street that the big bonus culture is waking fairly rapidly from its short slumber over there.