The minister for communications, technology and broadcasting sees his White Paper on "Digital Britain" as a possibly unique event in the history of British government. 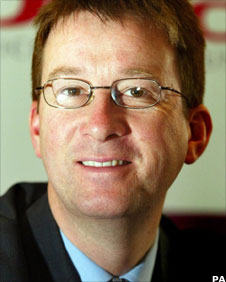 Brainy, personable Lord Carter views the report he has written (and it is a surprisingly personal evaluation) as an attempt to promote a particular industrial sector, the media and digital technology sector - which the government estimates contributes around 8% of our national output, our GDP.

Its rareness is that he can't recall any previous White Papers that were focused exclusively on the needs of a particular sector.

In a technical sense, he may be right - although successive government reviews of the UK's competitiveness have agonised over the perceived weakness of British manufacturing, and there have been endless studies of how to promote financial services and the City of London.

So on the day that Carter's conclusions are published, one question is why the digital industries are more deserving of ministerial attention than - say - pharmaceuticals, or defence, or motor manufacturing, or food and drink, or civil aviation.

If you work in those industries, you may think "thank goodness ministers aren't meddling with us".

But you might also be a bit miffed that the government doesn't seem to think that what you do is as important to the UK's prosperity as what those flashy boys and girls do in advertising, TV, telecoms, chip-making and so on.

That said, Carter's White Paper will in practice do a great deal more than endeavour to promote the needs of a bunch of companies perceived to be particularly important to Britain's longer-term prosperity.

Because, of course, the development of the so-called digital economy - especially the internet - has implications for the competitiveness of all our companies, for the skills of British people, for the healthiness of our cultural life, and for democracy.

The big point is that the broadband network is an important public utility - though perhaps the prime minister over-egged it this morning (surely not) when he wrote in the Times that "a fast internet connection is now seen by most of the public as an essential service, as indispensable as electricity, gas and water".

It will be fascinating to see how Carter reconciles his desire to provide a benign terrain for the commercial players in the digital industries with the imperative of correcting market failures, so that uncommercial but vital public needs are met.

In no particular order of importance these public goods include:

• access to a fast connection for the 2.5m or so people who currently have no such access (and not just households, but broadband-deprived businesses too);

• diverse sources of regional and local news, that are not unimportant to the prospects for local democracy;

• a feast of public-service programmes provided through a variety of channels and "platforms" (not just those provided by my employer, I suppose).

There are tensions between the commercial interests of companies and the cultural and social priorities of the nation. It would be naïve to pretend otherwise.

How Carter and the government choose to reconcile those tensions matters to most of us.