The Great British Experiment begins today, when the Bank of England's wades into the market to buy £2bn of British government bonds for ready money. 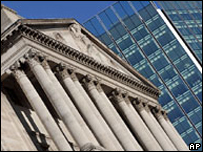 Note it down in big red letters: it's Quantitative Easing Day, QE Day, when the Bank of England attempts to stimulate economic activity by its new initiative to reduce the interest rates we actually pay and to increase the amount of money in circulation.

Actually, the Bank of England's announcement that it was proposing to spend up to £150bn - and £75bn initially - on public-sector and corporate debt has already had a substantial market impact.

The price of medium and long term gilts (British government bonds) has risen between 17% and 20% over the week since the size of the operation was disclosed.

The corollary of that is a fall in the yield on gilts to levels we've not seen since the 1950s.

If you'd bought gilts yesterday, the yield was around 2% for a five year loan to our government, 3% for ten years and 4% for 20 years.

The Treasury has to pump out over £100bn a year of new government bonds over the next two or three years, to finance the ballooning gap between what the public-sector spends and what it receives in tax revenues.

And the device of authorising the Bank of England to buy up a huge proportion of these IOUs has apparently reduced the cost of all that borrowing to an astonishing degree.

Surely if markets were rational and efficient, there would be no impact on gilt prices, or yields or interest rates at all.

Isn't there a kind of Ricardian equivalence going on here, where nothing of economic substance has actually changed?

It seems to me that this policy only works on the basis that markets are irrational and short-termist.

All investors apparently see is the volume of Bank of England money going into the market that's increasing demand for gilts and driving up their price.

In a way, investors are not wrong. These are real purchases.

But what I find slightly odd is that investors don't think through what the Bank of England and Treasury are trying to achieve by doing this - what a successful outcome might look like.

The point of the Bank of England's exercise is to increase money in circulation, to ward off the threat of deflation and to stimulate economic activity.

Two things should then follow. The liquidity of our banks should improve - and with any luck they would then lend some of that cash to businesses or households, who would then do a bit of useful spending or investing.

And the pension funds should use some or all of that cash to buy other assets, anything from more gilts, to shares or property - which should have a beneficial downward effect on yields and interest rates and also a helpful upward effect on asset prices.

Now it's very uncertain how much of that good stuff will actually happen.

In an extreme case, where banks and pension funds are terrified of taking risks, the money could simply sit in the banks, doing nothing.

And one important reason why it may be naïve to anticipate any significant impact on real lending to the real economy is that banks are still engaged in the vicious process of reducing their excessive exposure to other banks and financial institutions - and the new money injected by the Bank of England may be totally absorbed by that so-called "deleveraging".

But let's look on the bright side and assume that at some point the new money starts to do its job: lending increases, spending increases, prices rise, investors' appetite for risk returns.

Now guess what one inescapable consequence of that kind of economic recovery would be?

Well, interest rates would rise and the price of gilts would fall.

If quantitative easing is a success, the Bank of England will inevitably make a loss on the gilts it buys.

How big could that loss be?

Well the Bank of England may buy £100bn of government bonds in the coming weeks and months, or possibly even more. And if there were then a bit of a rise in inflation, coupled with investors becoming keener on purchasing riskier assets (such as equities, property and lower-grade corporate debt), well a 30% fall in the price of government bonds would not be out of the question.

And that would generate an eye-watering loss for the Bank of £30bn.

There's also a worse case scenario - which is that inflation could take off with a vengeance. And in those circumstances, the Bank would probably have to dump a load of bonds on the market to drain surplus money from the system as quickly as possible.

In those circumstances, goodness knows how substantial the losses could turn out to be.

That said, many would see that as a price worth paying, however chunky, if it helped to deliver an economic recovery.

But there is a paradox here - which I have already alluded to.

So in a curious way, markets seem to be voting that QE won't work (unless you believe that markets are wholly irrational, which may well be the correct explanation).