The National Audit Office's report into the events leading up to the nationalisation of Northern Rock can be captured in three simple points, none of which will surprise you: 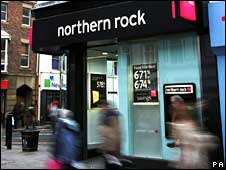 1) In 2004 and subsequently, the Treasury - under the then Chancellor, Gordon Brown - didn't appreciate that banks were taking on dangerous risks by becoming dependent for funds on wholesale markets, and didn't see the urgency of making adequate preparations for the possible collapse of those banks (even though it recognised that it didn't have an adequate system for dealing with such crises);

2) In the autumn of 2007, the Treasury - under the current Chancellor, Alistair Darling - didn't expect house prices to fall by more than a few percentage points and didn't believe the UK would suffer a recession;

3) Until far too late, all the authorities - the Treasury and the Financial Services Authority in particular - had a hopelessly naïve view that Northern Rock was not taking excessive risks by providing 100% mortgages at the top of the housing market.

Of course it's embarrassing for Gordon Brown and Alistair Darling that a spotlight has been shone again on their misjudgements. But we've known for many months that they were wrong on these very big issues.

A mountain of evidence has been building and has been visible for more than a year that they, and the Bank of England, and the Financial Services Authority (and the US Federal Reserve, and so on) simply didn't appreciate that - since around 2000 - they were steering the Titanic into the mother-of-all economic icebergs.

Their misjudgements in the Northern Rock debacle were symptomatic of a much more serious economic myopia: they didn't see that the architecture of the financial system was fatally unstable and that the foundations of our economy were crumbling under the weight of excessive borrowing.

However, as I've said, I think we already knew that, didn't we?