Paul Moore, the former head of risk at HBOS, has won the big argument.

In 2003 and 2004, he warned HBOS's senior directors that they were expanding the bank's loan book too fast: HBOS was lending too much.

Guess what? He seems to have been right.

HBOS went to the brink of collapse because it financed its lending growth by raising funds on wholesale markets - and when wholesale funds became progressively harder to obtain after the summer of 2007, HBOS was careering toward the cliff edge.

It is alive today only because it was rescued by an injection of capital from taxpayers and by being taken over by Lloyds.

So no-one in their right mind would argue that Moore got it wrong in respect of the big issue - though Moore's critique was not that funding would dry up, but that borrowers would have difficulty repaying (which is an important nuance).

And since Sir James Crosby was chief executive of HBOS at the time Moore was making his complaints, history - or the closure of wholesale markets - has made Sir James look like a bit of a nit. 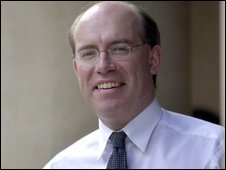 Which is why if Sir James had not resigned today as deputy chairman of the Financial Services Authority, the City watchdog, he would probably have been forced from office over the coming weeks and months by unforgiving public opinion.

But that does not mean that Sir James was wrong - in a legal or regulatory sense - to have asked Moore to leave HBOS or to have rejected some of Moore's concerns.

Moore's dossier of complaints that HBOS and Sir James were taking excessive risks was thoroughly investigated by KPMG, the accountancy firm.

And KPMG's conclusion - that HBOS had appropriate risk controls in place - was accepted by the Financial Services Authority.

My understanding is the FSA stands by that judgement.

Which is not to say that either the FSA or Sir James would have no regrets that HBOS did not check its lending growth.

But - amazing as it may now seem - HBOS and the FSA did not believe, in 2004 and 2005, that it was appropriate to assess the riskiness of its rate of growth on the basis that funds from wholesale sources could vanish.

What's the point? Well, it's that Sir James was not obliged to resign as the FSA's deputy chair because of evidence that he broke any law or regulation.

And the FSA put no pressure on him to resign.

Sir James chose to resign because he wanted to protect the FSA from incessant criticism by media and opposition politicians that its number two had made a chronically bad judgement as chief executive of HBOS.

So the lesson of hindsight is that Sir James made a disastrous judgement about HBOS's rate of expansion - but not that he committed a crime or a misdemeanour.

And some would say that it's right that he quit, because all of us are paying for his misjudgement with the massive financial support that taxpayers have been forced to give HBOS.