Total and the Wimbledon effect

Almost exactly two years ago, the chief executive of Rolls-Royce - the UK's most successful manufacturer - gave a stark warning about the risks to the UK of the government's "everything's-for-sale" industrial policy.

Sir John Rose told the FT: "It is pretty obvious that if businesses are not from a particular country, and the brand, and the routes to market and the intellectual property and everything else are vested somewhere else, then any decisions that are made about investments and dis-investments will have a national flavour. They are bound to, it is human nature."

This was so against the political and industrial consensus at the time, it was as if Sir John had blown a raspberry at the Queen.

Because Rolls makes stuff (dirty great turbines, among other things) that giant overseas companies actually wanted to buy, Rose was listened to politely by ministers - and ignored.

Today, however, the nationality of businesses suddenly seems more important.

As Rose said, it is human nature for a business with operations all over the world to favour its home country when making decisions about where to expand - or, as in the current horrible economic climate, where to cut.

So it should be no surprise that an Italian company IREM, hired by Total of France on a construction project in Lincolnshire, should itself be employing Italian workers. In a way it would have been more surprising, at a time when money is tight all over the world, if IREM had shunned its own people and had hired new British workers. 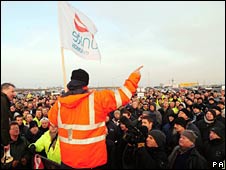 And British ministers can't complain about the behaviour of Total or IREM, because it's been an article of faith for them that an open economy is a successful economy - which is why Peter Mandelson, the Business Secretary, hasn't complained about them.

The UK is an outlier in the degree to which it has put all its assets in the shop window and welcomed almost all and every possible overseas buyer of its companies. Even in the US, the great champion of the market, there are many more restrictions on the sale of businesses to foreign interests.

But Wimbledonisation - the notion that Britain is the winner even if none of the economic players are actually British - became official dogma.

As the UK sold its power industry, its few remaining car makers, its merchant banks, and its airports, the theory was that it would gain access to top quality management from abroad and lots of lovely cheap capital from foreign sources.

British consumers would benefit from the lower prices that would be the consequence of overseas businesses' deployment of this low-cost capital.

The money the UK received for its corporate trophies would be reinvested to create the trophies of the future.

And British businesses would shape up thanks to the more intense competition they faced.

So for years, the UK could look down its nose at those countries that took patriotic pride in the size and success of their companies.

The UK didn't care that not a single leading investment bank in the City of London was British, or that its airports were owned by the Spanish, or that every single mass-market car was made by the Japanese, or the Americans or the Germans, or that its power was supplied by continental interests.

The growth rate of the relatively open British economy went up a gear and unemployment fell - while unemployment in the more closed German and French economies remained resolutely high and their growth was more lacklustre.

But there was always a doubt - and one which I raised in this blog - about whether the openness of the UK economy would serve the British people quite so well when the economic going became tougher.

We'll know soon enough whether those fears were legitimate.

What we know already is that the shortage of credit is worse here than in many other countries because a disproportionate number of foreign banks supplied loans to UK households and businesses - and they've gone home, taking their credit with them.

By contrast, at the World Economic Forum that closed yesterday, the Indians and the Chinese were swaggering about how they've benefited in the global recession from retaining domestic control of their important industries, especially banking.

This is not to argue that a return to protectionism - the erection of national barriers against trade and flows of capital - would be anything other than disastrous, for the UK and for the world.

History does indeed tell us that protectionism in a worldwide downturn is the shortest route to slump and depression.

But, as Sir John Rose said two years ago, if Britain has become a giant "aircraft carrier" for foreign companies, jobs won't naturally go to British workers - unless British workers have a massive competitive advantage.

This is how he put it: "I think there is a growing recognition that if we believe we are going to be a knowledge-based economy, then not having a world-class education system is a disadvantage."

Or to put it another way, even if the British shouldn't weep about not winning at Wimbledon and should celebrate that it's the best tournament in the world, we should aspire to be a nation of players, managers and umpires - not a nation of ball boys.