Not quite the full sorry

Apologies carry weight when they are accompanied by a clear explanation by the miscreants of what they did wrong and why. 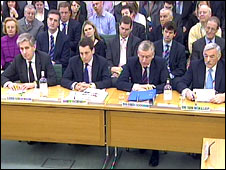 And the problem with the sorries uttered by the former bosses of Royal Bank of Scotland and HBOS is that they lacked a detailed account of why they did what they did.

Mistakes were admitted - but motivation was glossed over.

Sir Tom Mckillop and Sir Fred Goodwin of Royal Bank of Scotland both conceded that buying the toxic rump of ABN after the start of the credit crunch in the autumn of 2007 was a howler of the first order.

Lord Stevenson and Andy Hornby of HBOS admitted their bank had become too dependent on unreliable finance from wholesale markets and had lent too much to property and construction companies, among other things.

But they gave little clue as to why they made these remarkable errors.

Were their banks gripped by a get-rich-quick bonus culture that led them to take excessive risks in the pursuit of short-term profit?

There was a faint nod toward that, but no acknowledgement that the remuneration system that enriched the few at the expense of the many might have been a serious problem.

Did they lack the knowledge and skills to assess the risks they were running? They all denied that they weren't up to the task of controlling their huge, complex and sprawling banks.

Were there inadequate checks and balances in place, lousy governance, the wrong people on the wrong board committees? They all looked a bit nonplussed.

Perhaps it's too early to expect those in part to blame for our economic woes to fully understand the motivation that led to the calamitous meltdown of their banks and the near collapse of the entire financial system.

Perhaps they never will grasp fully what went wrong. But it matters that we learn the lessons, so we can design a sounder, safer financial system.