The profits warning just released by Lloyds is shocking.

The loss at HBOS - which is a fraction under £11bn - represents a new record loss for a British bank (if goodwill write-offs are excluded, to be boringly technical for a second). 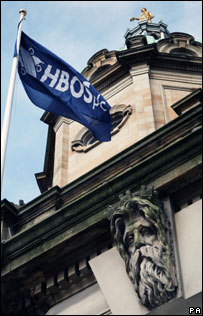 Lloyds says that on a statutory basis HBOS - which it bought earlier this year - lost £10bn in 2008 plus a so-called policyholder charge of £0.9bn (so just under £11bn altogether).

And on a statutory basis, the profit for Lloyds was was just under £1bn last year.

So on a merged basis for the two banks together, the result for 2008 would have been around £10bn.

Which is enough to turn most bankers white, even those hardened by the battles of the past 18 months.

What generated the colossal loss at HBOS was, to a large extent, eye-watering charges of £7bn on corporate loans that have gone bad - in part reflecting the recession we're in.

But Lloyds says that the loss on loans to companies is also the result of Lloyds applying its more conservative accounting standards to HBOS's loan book - which is one serious kick in the tender parts for HBOS's previous executives.

And it's pretty embarrassing - to put it mildly - for Lloyds' chief executive, Eric Daniels.

Lloyds didn't have to buy enfeebled HBOS - even though the government encouraged it to do so.

And only this week, Daniels insisted that, in time, Lloyds would make good money from the takeover.

This afternoon's horrible fall in Lloyds' share price is investors having serious doubts about whether Lloyds was right to buy HBOS.

Daniels will hope that those investors don't start to have serious doubts about whether he is the right man to attempt to rebuild a bank that many would say has been seriously weakened by the acquisition of HBOS.