If you're of a nervous disposition don't turn to page 20 of HBOS's 2008 results, published early this morning. 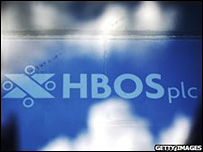 These are the last ever financial results for HBOS as a discrete entity: it was recently swallowed by Lloyds - which now has a bad case of indigestion.

The horror story that's told under the heading "corporate" from page 20 onwards is of a bank that appears to have had a death wish.

For all the criticism of the alleged excessive risks taken by HBOS's mortgage department - as per the charges levelled at the bank by its former head of regulatory risk, Paul Moore - the most reckless lending and investments were made by the bit of the bank that provides services to companies.

This corporate division generated losses of £6.8bn in 2008 from loans and advances to businesses of £116bn.

It has had to write off an average of 47% of those loans in this area that have gone bad. Almost 12% of all its corporate loans are now classified as impaired or damaged. And as a percentage of the total corporate lending book, the impairment charge is just under 6%.

On the basis of those statistics, HBOS appears to have left a big bag of money open on the pavement with a sign saying "borrow what you want".

As I've said before, it is amazing that the Financial Services Authority, the City watchdog, didn't feel it was appropriate to rein in HBOS's corporate lending department.

In particular, it's odd that the FSA didn't apparently appreciate that the ability of a lender to properly assess credit risk can be dangerously damaged when that lender thinks it's going to make massive returns on equity investments (the notorious "pig-on-pork").

So poor old Lloyds now owns what can be seen as one of the worst-quality loan books on the planet.

Which means that the big message of HBOS's shockingly bad results is that Lloyds lacks the resources to cope with potential future losses.

That's why Lloyds has been in talks with the Treasury on a deal that would see taxpayers taking on the liability for much of the future losses on around £250bn of loans and investments.

These insured assets would include almost the whole of HBOS's corporate loan book, a load of HBOS's mortgages (where the impairment charge has also risen significantly) and a bunch of silly investments made by HBOS's treasury operation.

This insurance deal would be the equivalent of the protection taxpayers yesterday gave to Royal Bank of Scotland - though on terms that may look worse for Lloyds, since HBOS's portfolio of loans to companies is viewed by the government as exceptionally high risk.

To state the obvious but frightening point, HBOS's £10.8bn overall loss was generated last year, before the recession really bit on the ability of personal and corporate customers to keep up the payments.

As of last night, it looked as though agreement was near - which mattered, since the City was aware that both sides had set a deadline of this morning to announce the deal.

However, it's almost elevenses and no deal has been announced.

Is this a matter of grave concern? Probably not.

As I understand it, there is no major difference of principle between Lloyds and the Treasury on the bailout terms.

There's been a technical hitch, the equivalent of what goes wrong when you type the wrong numbers into a mathematical formula.

The point is that the Treasury and its advisers have constructed a model that generates a price for the insurance that we as taxpayers are selling to the banks on the basis of various different measures of the quality of assets to be insured.

So if the data that goes into the model isn't quite right, the wrong answer will be generated on material issues like how much of the loss on loans should stay with Lloyds' current shareholders and how much Lloyds should pay for insurance in the form of new non-voting shares.

The glitch can be solved. And it will be solved, though possibly not till Monday or so.

Because what HBOS's stupendous losses demonstrate is that Lloyds will not thrive again without a fairly substantial financial prop being provided by taxpayers, by you and me.