Although Barclays' share price has recovered a good deal in the past few days, the bank's value has still plunged more than 80% over the past year.

And its market value as of Friday night was £8.8bn - which is just a bit more than the £6.1bn that the bank has just announced as its statutory pre-tax profit for 2008. 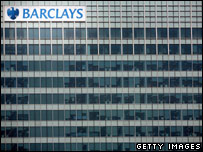 In other words, investors are valuing Barclays at a little bit more than the value of a single year's profit.

Well, it implies a couple of troubling things.

First, it shouts that investors believe that the prospects for Barclays are pretty dire - that they regard the £6.1bn of profit as an interesting historical factoid of little relevance to the future earning power of this bank (or perhaps any bank).

The City is basically saying that the profitability of banks such as Barclays has been squeezed in a semi-permanent way.

Second, the low share price rather reinforces the notion that the accounting rules for banks aren't really capturing the economic reality.

Even if you take the view that investors are being too pessimistic about what lurks around the corner for Barclays, there is something rather extraordinary about Barclays declaring a profit on this scale - and adding more than £5bn of retained earnings to reserves - and yet being deemed by the Financial Services Authority to have needed to raise more than £10bn in new capital.

It is of course clear that the City watchdog and other regulators allowed banks - perhaps negligently - to grow and grow on the basis of weak foundations, with too little capital underpinning them.

But there is nonetheless a terrible inconsistency between Barclays' apparent financial success and the verdict of the FSA that it was dangerously short of capital.

All of this just adds to a general sense of anxiety that the official way of painting what's going on at a bank - through the annual audited figures - doesn't capture the reality.

Which is not a trivial issue. Because the markets that underpin the workings of our economy won't function again properly unless and until we have a strong sense of what's happening inside our banks.

UPDATE 0905: Barclays' 14% fall in profits looks like a triumph compared with the huge losses suffered by its big rivals, Royal Bank of Scotland and HBOS.

But all is not quite what it seems, because Barclays' performance has been flattered by some one-off and unusual gains on deals.

That said, investors liked what they saw and the Barclays share price has risen.

And what about the heated issue of the moment, bonuses?

Well, John Varley, Barclays chief executive, told me that what he calls the variable element of pay at his bank has fallen by almost 50%.

And he concedes that some bankers' pay was - for a period - excessive.

But the Chancellor is saying he will have the right to stick his nose into how Barclays rewards its staff, because the bank wants to participate in the scheme by which taxpayers will insure banks against losses on their more foolish loans and investments.

So it's moot whether Barclays' remuneration practices will silence critics of the City's big-bonus culture - especially since Vince Cable, the Liberal Democrats' scourge of the banks, is trying to shine a bright light on Barclays' highly profitable business that helps companies reduce their tax bills.

SECOND UPDATE 1000: I am trying to assess the significance of the astonishing increase in the value of Barclays' reported assets and liabilities, from £1,227bn to £2,053bn.

Barclays' gross assets and liabilities are now significantly greater than the annual output of the British economy.

At a time when banks are supposed to be shrinking their leverage for all our sakes - especially their exposure to other financial institutions - this is not wholly reassuring.

Part of that growth in the balance sheet stems from the impact of the fall in sterling on foreign-currency assets and liabilities. And part stems from an increase in loans and advances of £124bn (which isn't trivial).

But the biggest increment was "£737bn attributable to an increase in derivative assets", according to Barclays' finance director, Chris Lucas.

That sounds worrying. But he insists that the derivative exposure would be £917bn lower if the accounting rules allowed the bank to show the net position with individual customers or counterparties.

But that's only reassuring up to a point - because what the net position obscures is all sorts of niceties such as the differing maturities of the reciprocal claims with the counterparties and also the rights of Barclays and the counterparties in the unlikely event that one of them were to go bust.

Broadly, if you want to be anxious about the prospects for Barclays you would say that its balance sheet is becoming even more complex and substantial, when the painful lesson of recent history would be that fortune favours smaller banks engaged in simpler transactions.