Sales in a typical Next store, so called like-for-like sales, have fallen 7%.

To put it another way, the UK's second biggest fashion retailer is selling one in twenty fewer skirts and shirts in shops unaffected by new openings. 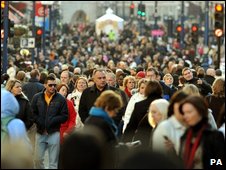 But investors in its shares may actually breathe a small sigh of relief that its performance in the last five months of 2008 wasn't even worse, given the gloom that's engulfed the High Street.

Also there's comfort to be had from Next's announcement that it's on course to make profits in line with City forecasts of more than £415m before tax.

At Debenhams too the theme is that it could all have been a lot worse, as the leading department store chain reported like-for-like sales down 3.5% in the 18 weeks to the beginning of January.

Although Debenhams is widely viewed as having too much debt, barring an unexpected calamity both it and Next will still be standing after the downturn in consumer spending which has exterminated weaker rivals.

What will particularly impress Debenhams' creditors is that the gross value of its transactions and profits have risen, the business is generating cash, and net debt has fallen

But it won't be easy.

Next warns that the coming headache will be a massive increase in costs caused by the sharp devaluation of sterling.

In Next's case this doesn't bite until the autumn and winter of this year, because it has hedged its currency exposure until then. For most big retailers, including Marks & Spencer, the big impact of the weakened pound will come in the middle of the year.

There will be a horrible choice for Next, M&S, Primark and the rest, who buy most of their stock outside the UK.

Should they absorb an estimated 20% currency-related increase in the cost of clothing and other goods manufactured for them in China, India, Hungary and so on?

That, of course, would mean that their profits - which are already on a crash diet - would be squeezed further.

Or, in a period of feeble consumer demand, is there any chance they'll be able to pass on the cost increases to cash-strapped consumers?

Their ability to pass on the costs to us will depend on the intensity of competition at the time.

Right now, with Tesco announcing yet another round of price cuts, there's no sign of an easing up in the competitive assault.

In fact, one of the reasons that the sales of Debs and Next weren't even worse was the significant discounting that took place in the Christmas fortnight.

Anyone who made the mistake - as I did - of venturing to a mall or shopping centre in late December will know that we haven't been wholly weaned off our spend-spend-spend habits.

There was a mob, frantically looking for bargains.

But we're all back at work now, the last Woolworths have shut their doors forever, and a chill wind is blowing through the economy.

Those who run our biggest stores tell me they're braced for the worst of winters.

Update 1243: The Times is, of course, correct that M&S is poised to announce around 1,000 job cuts. Details will be announced tomorrow in its trading update and the statutory consultation period will commence. But this shouldn't be seen as a savage and massive redundancy programme. M&S is the largest fashion retailer in the UK and employs more than 70,000. These job reductions represent less than 2% of the workforce.

Also, I didn't mean to imply, as some have suggested, that Next's figures include the post-Christmas sale (its trading update relates to the period up to and including Christmas Eve). What I thought I was saying was that it and Debs (and lots of other big store groups) benefited from a shopping surge in the holiday season (which is in Debs' announced figures, but not Next's).