House repossessions are expected to rise to 75,000 next year, ministers have been told by the Council of Mortgage Lenders. 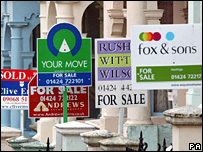 This would take repossessions very close to the peak of 75,500 reached in 1991, during the last British recession.

It compares with the Council of Mortgage Lenders' current forecast that 45,000 homes will be repossessed in the current year.

The bulk of repossessed homes are owner-occupied. So far this year, just 2,700 buy-to-let properties have been repossessed.

The Council of Mortgage Lenders told me that it hasn't yet finalised its forecast for repossessions in 2009, saying it was waiting to see whether ministers would take action to reduce the surge in the number of houses where families are evicted and their properties are sold.

However, it didn't deny that it has informed the government that there will be 75,000 homes seized by banks and building societies next year on current trends.

The government has been looking at ways to protect families from the trauma of losing their homes when a breadwinner loses his or her job.