Gordon Brown has just announced a scheme which he hopes will lead to significantly fewer repossessions next year than the 75,000 currently expected by the CML. 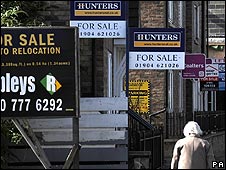 It's an attempt to provide assistance for two years to those families which suffer a fall in income as a result of the UK's economic woes.

The scheme is probably best explained by way of an example.

Let's say Mr and Mrs Slightly-Stretched have a £400,000 mortgage, which is the biggest mortgage allowed under the government's new bailout scheme.

Both have jobs. Rory Slightly-Stretched is a manager in the building industry and Melissa works as an estate agent.

Toward the end of this year, he's made redundant and her income collapses.

So they are no longer able to keep up the payments on their mortgage.

They then talk to their bank and calculate that they can only pay £5,000 a year of the £20,000 annual interest payments they're supposed to make (I am ignoring principal repayments).

In those circumstances, their home is seriously at risk: the bank may well decide to seize their home and sell it.

What's happened today is that the prime minster has made it less of a financial strain for the bank to leave the Slightly-Stretcheds in their home, for a maximum of two years (which the government hopes will be long enough for Rory and Melissa to get back on their feet, in a financial sense).

What Mr Brown has announced is that if the £15,000 a year which the Slightly-Stretcheds can't pay is added to the principal they owe - if the bank allows the interest to be rolled up, to use the jargon - there will be no risk for the bank, because the Treasury will guarantee that £15,000.

Or, to put it another way, the taxpayer will promise to pay back the bank that £15,000 if the Slightly-Stretcheds find themselves unable to do so. So that sum of £15,000 will become a contingent liability of the public sector.

It's all quite complicated, but the banks plainly think that the scheme has merit, since eight of the biggest have signalled that they'll back it (or so I'm told).

However, the scheme is not completely free for the banks, in that I understand they'll have to pay a fee for the guarantee. Also, there is a cost to banks of not repossessing from the incremental capital they have to allocate to any mortgage when the earning power of the relevant borrower collapses (sorry if this is a bit technical).

On the other hand, the legal and admin costs of repossessing are always pretty big, so banks don't like to repossess if they can possibly avoid doing so.

In other words, Brown's mortgage wheeze could lead to a serious fall in the number of homes repossessed next year - though there must be a fear that a repossession bulge will simply be delayed for two years rather than eliminated altogether.

You'll want to know what the cost of all this for the taxpayer would be. For what it's worth, my calculation is that it'll lead to taxpayers guaranteeing somewhere between £900m and £1.4bn of rolled up interest (the Government is saying around £1bn).

Which, in the context of the £120bn or so that the government expects to borrow next year, is almost a rounding error - and some will say is cheap at the price, if it were to prevent 20,000 or so families being evicted next year (but see below).

I've become a bit wary of the Government's claim that the eight biggest banks have backed the mortgage-guarantee scheme, having spoken to a couple of them.

They're not prepared to attack it in public. But they're not sure it will have much of an impact, unless they are strong-armed into keeping the genuinely feckless in their homes - which the banks feel would be a bad thing.

Also, Margaret Beckett, the housing minister, has just said on BBC Five Live that a bank has estimated for the Government that the scheme will help perhaps 9,000 families who would otherwise have lost their homes.

That's rather smaller potatoes than the Prime Minister implied - although, as Mrs Beckett also said, the existence of the scheme may alleviate the anxiety of many more hard-pressed families.