The US Federal Reserve and the Bank of England regard the great threat right now as deflation. 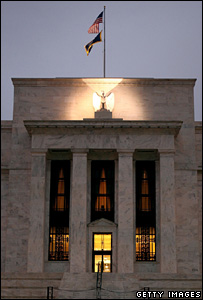 If they're right, deflation would be a disaster for our economies, for the reason set out in typically elegant fashion this morning by Martin Wolf in the Financial Times.

As I've been boring you rigid with for months and months now, the cause of our economic woes is that we borrowed too much - or financial institutions lent us too much (to digress for a second: there's a resonant unresolved issue of accountability and responsibility in these two ways of seeing the debt binge).

The sum of consumer and corporate borrowing in the UK is equivalent to something like 240% of our annual economic output in the UK, while US household and business debt is closer to 300% of that country's GDP. In cash money, that's about $45,000bn - or one of those big numbers that induces vertigo.

Which is quite a burden, and - as far as I can tell - a record-breaking mountain of debt for us to pay off.

The alarming and important point is that if deflation were to set in, if prices were to fall, the real burden of that debt would increase - thus prolonging and exacerbating the severe recessions that appear to be taking hold in both the US and the UK.

That's why the US Federal Reserve has set its policy interest rate as so close to bupkes or zero as makes no difference.

The Fed is doing this by spending hundreds of billions of dollars buying up US government debt and also loans to companies and householders - which has the effect of forcing down yields or interest rates.

By the time the US central bank is finished, it will have pumped trillions of dollars into the US economy in this way.

This process has the ghastly name of "quantitative easing". And it's not dissimilar to running the money printing presses at quadruple speed, filling up choppers with cash and then showering the population with greenbacks.

It's supposed to encourage businesses and consumers to spend rather than save, so that economic activity revives.

And it exposes the shocking paradox of our age: debt got us into this mess, but paying down that debt too quickly will only make the mess worse (or so the Federal Reserve and Bank of England believe - though I should point out that a growing number of economists are beginning to express fears that what the central banks are doing will prolong and exacerbate the crisis).

What is profoundly unsettling to central banks and governments is that growing numbers of businesses and consumers are opting to save rather than spend even as interest rates fall to these record lows.

Which is why those central banks and governments are taking ever more desperate steps to stimulate growth through increases in public spending and to make money as cheap as possible.

And that of course raises the question about whether the worst threat we currently face is deflation or inflation.

At the moment our economies turn, there's a genuine risk that central banks won't be able to drain all this cheap money from the system quickly enough to avert quite a surge in the inflation rate.

Against that background, I conducted an unscientific poll of leaders of some of our biggest multinational businesses at a lunch a few days ago.

I asked them to think about 2010, and whether they were planning for that to be a year of deflation or inflation.

To a man (this isn't me being sexist, it's that world: they were all men), they said they expected a sharp rise in the inflation rate.

They said this in a resigned way, as though it was the bill for a party that had been far too expensive and had gone on far too long.

The Bank of England's monthly agents' survey of business conditions contains disturbing evidence of businesses turning down profitable orders because they're unable to obtain either loans from banks to finance the increase in working capital or insurance from specialist insurers to cover the risk of non payment.